Stepping Stones: Sky Sports’ Elisha Cunningham on getting her dream job as a sports sound operator 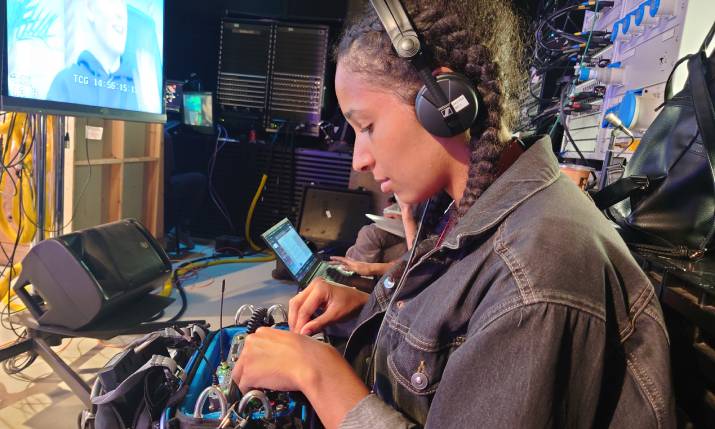 Elisha Cunningham, sound operator at Sky Sports, is the subject of SVG Europe’s latest article in the Stepping Stones series. Stepping Stones looks at how people have entered the sports broadcasting industry, where they want to take their careers, and their top tips for others.

What is your job role today and what do you love about it?

I’m a sound operator. This is the dream job that I never knew about. I genuinely love that sound operators cover quite a lot of ground, which means we contribute to the creation of productions in a number of ways.

“It’s very fast paced, and anything can change in a second. An audio feed might drop out or a guests’ microphone might fall off and suddenly their voice isn’t going to air. You really have to be on your toes!”

Not only do I get to focus on two of my biggest passions every day – sound and sport – but occasionally I’m working with bands too, so it’s essentially all my dreams thrown into one.

I love meeting new people which is a huge part of the role, and the work is so varied so it’s always exciting to see what’s next!

What does your current job entail on a day to day basis?

Every day is different. Some are spent rigging the studio floors for shows, which includes running cables, patching the speakers and testing microphones. Once we’re prepared, we await the arrival of the talent, so we can mic them up and fit their earpiece which allows them to converse with the directors and producers without leaving the set.

Other days are focused on communicating with different departments and crew at other locations and ensuring everyone is receiving the correct audio output. It’s very fast paced, and anything can change in a second. An audio feed might drop out or a guests’ microphone might fall off and suddenly their voice isn’t going to air. You really have to be on your toes! 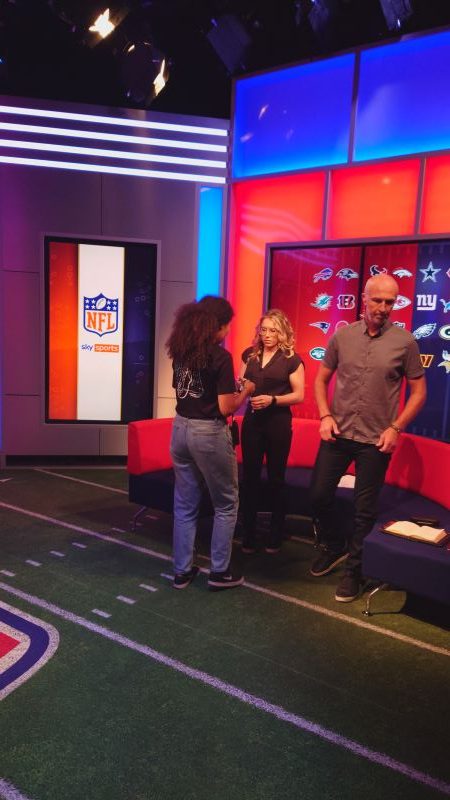 Can you talk us through your relevant education that helped you break into the sports broadcasting industry?

During my degree, I decided to switch from production and followed the path to post production. My final year focused on Sound Design for Film. Whilst it’s a completely different area, I had still familiarised myself with a mixing environment and had the knowledge of a live production setting.

It’s not always about formal education though; sometimes it’s about what you learn on your journey and how passionate you are. I was playing football from the age of four and knew I wanted to work in sound from the age of 12, and that determination has driven me to where I am now.

How did you get your first job in sports broadcasting, what was the role, and when?

This is my first role in sports broadcasting. Before joining Sky in February this year, I was an audio engineer at a recording studio, where I worked with a range of clients to record and produce their audio content. I also freelanced as a sound designer and had mixed sound for films and adverts.

I loved what I was doing but after a few years balancing both roles, I decided I wanted to step it up and go for a bigger challenge.

When I saw the sound operator role advertised by Sky Sports, I just went for it. It was exactly what I was looking for. I really didn’t think I would get anywhere as I had never set foot in a TV studio and I didn’t have a specific degree in broadcasting, but transferable skills are more valuable than you know and about a week after applying, I was called for an interview.

What happened next to get you where you are today?

Sky immediately offered to train me in the areas I had never focused on before. This was a massive surprise as many companies will ask you to have all the relevant knowledge before starting, so it was a huge relief and gave me the confidence boost I needed.

It’s great working with all different departments as everyone is happy to impart their knowledge but for me, it’s amazing to have such a strong sound crew who are always supportive of each other. I’m constantly learning and stepping more into my role as I go.

Where job would you like to be in in five or 10 years time? What are your career goals?

There’re a lot of opportunities out there! This role can lead you down so many paths, but I’ve always enjoyed being behind a mixing desk, so I aim to become a sound supervisor mixing the sports broadcast output. I’m also really interested in going out on OB’s and working on locations so that’s another goal!

Can you give us some top tips that really helped you get where you are today?

Can you give us some tips on things not to do or to avoid when trying to get a role you really want?

One of the most important things I would say to avoid doing is discrediting your education. When you’re skilled in a certain area, it’s very easy to think of it as ‘easy’ but others may see your education as vital.

There are still a huge number of barriers to getting a job in the industry. I’ve found that unless you go to a school specifically for broadcasting, a lot of these jobs are unheard of. As the saying goes a large part of breaking into the industry is about who you know and unfortunately this results in a lack of job advertisements.

Furthermore, from my own personal experience, the industry remains heavily male dominated which can be intimidating. Although this is now beginning to change as relevant courses are becoming more accessible and more women and girls are breaking into the industry.

What would you recommend to other people thinking of working in the broadcast industry?

If you have the means, study a course related to the field you want to work in. It can give you a huge head start! If you’re interested in a particular company, have a look at their LinkedIn and check out their values and projects they have worked on recently.

Start networking. Join Facebook and Twitter groups, a lot of them will host socials that are free to attend and it’s a great way to get your name out there. Most important of all, be ready to learn!