Becoming ‘the Netflix of’ any broadcast genre is the aim of many new entrants to the online market. It is certainly the case for DAZN, which has emulated the Netflix model for sport.

DAZN now offers a very wide range of sports, on any device, with the ability to cancel the contract at any time. Having launched in 2016, the over-the-top streaming platform is now available in eight countries (having added Spain last week), with Brazil soon to follow. 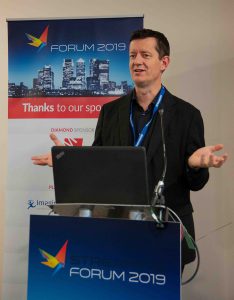 “We started in four markets: the German-speaking countries and Japan, because they are the best connected and OTT is very well established there,” its chief technology officer Florian Diederichsen told delegates at the Streaming Forum in London last week.

DAZN covers a wide range of sports, including English, Japanese and Italian football, NFL, tennis, boxing, Moto GP and basketball, and delivered 265million hours of content in 2018. He believes DAZN now has “a slightly unfair advantage” over linear TV, because its simple approach to programming means it can charge less, and be more flexible.

DAZN was founded by the Perform Group, which has been trading sports rights for more than 15 years, and has built up a powerful content and distribution platform. “Without this, and all the production that was hanging off behind it, we wouldn’t have been able to do this,” he said.

It has benefited from the move away from linear television, which is starting with younger age groups. According to recent research that Diederichsen cited, viewing in the 12-17 age group has halved over the past five years (dropping 13.4% in the last year alone). Figures for the 18-34 demographic show 38% and 12.3% drops respectively, whereas the 35-49 age group has only declined by 18% and 4.4% over the same periods. Older age groups have remained fairly stable.

It helps that connectivity is rising steadily, with about 83% of people in DAZN’s markets having internet access (with an average speed of 24.3MB), compared to some 51% globally (with an average of 9.1MB – although that speed is up 31% year-on-year, so progress is rapid).

Although mobile is increasingly important, the big TV screen is still central to DAZN’s viewers in most countries. Even in Italy, where its services are viewed by 25% on mobile (because mobile connectivity is often better than broadband), and 18% on the web, 57% view it on a TV. This rises to 73% viewing in the living room in the US (where web is at 12% and mobile 15%, and broadband connectivity is better).

“Sports is generally perceived as being a live proposition,” but DAZN’s live viewing varies significantly from country to country. In Japan and the US just 63% and 64% of views are live, whereas in Italy only 10% of its viewers watch on VoD and in the German-speaking countries, 22% watch VoD. That can be explained partly by a lot of sports happening at inconvenient hours, but the fact that so many viewers are prepared to watch sports outside the live windows is something they hadn’t predicted.

Although there is a lot of money in sports (about $87billion in total, of which some $50billion are the broadcast rights), Diederichsen said “it is very hard to make a profit out of it. A lot of the bigger leagues think that the only ones who can make money out of it are themselves,” which is why it is so hard to take a proposition like the English Premier League and make money from it.

However, DAZN did see an opportunity from buying OTT rights, which cost less, and trying to provide a comprehensive offering. Indeed, “in Japan, we pretty much own all the rights. The only rights we don’t own is sumo, which is very big in Japan, and the Rugby World Cup this year, but otherwise if you want sports, come to us.”

One problem is having to support all sorts of different devices, including older models, in order to meet its requirement to be on at least 95% of devices in any market, whether smart TV sets, Apple TV, Roku or Sony PlayStations (essential in Japan where it represents about 10% of the market). It requires a lot of work for Diederichsen and his team as “it is very hard to achieve common features across all of them, so that it is easy for people to go between devices.”

Netflix “is in a situation where it doesn’t need that anymore,” as it is so big that it can just give manufacturers a device integration layer, and they will build a client for it, as no one can afford to build a device that doesn’t support Netflix. He hopes that DAZN will reach a similar position.

There is also the issue of handling huge audience spikes. “While platforms like Amazon, which we use for our backend, generally scale for these audiences, they don’t scale if you don’t pre-warn them, and you can’t automate it.” It can currently handle 10million viewers in parallel and hopes to add another cloud service in the next year or so.

Connectivity varies widely between countries. In Germany there are 33.1million broadband connected households, whereas Italy only has 13 million (far fewer than it should, even allowing for its slightly smaller population), while Italy’s average broadband speed is about 30% slower than Germany. “If you offer an HD service in a country and you don’t have the bandwidth available, you have a problem.” He said.

Two years ago DAZN went to Canada with NFL “and figured out too late that latency is a big issue there,” as many viewers also follow the game on their daily fantasy app, and would see the touchdown on the app 30 seconds before it was on the TV, “and were not happy.” Although this only affected a small number of viewers, it was a very vocal minority.

DAZN manages latency of about 25 seconds (compared to normal OTT latency of 45 to 60 seconds), and aims to get down to the 15 seconds or so of cable. Betting services require about three seconds. “It is possible to stream fast, but not to stream fast with good quality,” he said.

Unfortunately, it is important for people who are also following a game on social media, or are betting, or also listening to a radio feed. However, latency is not all bad. “It allows you to build a lot of products around it, which you want to take advantage of, such as goal alarms or you want to do personal conferences.” So he wouldn’t want to eliminate latency completely.

Responding to all these challenges is costly. It has spent about $200million on its platform and has also built its own applications and production network. Big data and personalisation is also important – to keep churn low. “We know that someone who watches three games a month is going to stay,” he said.

DAZN tends to do end-to-end production, so for a Bundesliga match being shown in Japan, it takes the feed via fibre to its data centres in the UK, then to Tokyo for localisation (graphics and commentary), then back to the UK, then to its two encoding centres in AWS, and finally out it its CDNs to deliver to users.

This means the signal goes around the world twice. However, it is a lot cheaper than setting up local production capacity in each market.

It has just launched Multiview, where users can have up to four screens at once, which requires more bandwidth. Peer-to-peer transmission could help reduce its CDN costs, but “we need to work out how we can avoid invoices to the end customer” if it ends up using too much of their bandwidth. Of course, more advanced codecs will help use less bandwidth, and it is only just beginning to roll out HEVC.

DAZN is regularly being asked about covering eSports, but “the problem is that eSports doesn’t have a proper business model around it yet. You can’t buy rights.” While he believes that “eSports is going to be massive” in the next few years, until there are rights to buy broadcasting will be difficult.

DAZN is also experimenting with using virtual reality systems to capture boxing, and rendering out a version that allows users to move a virtual camera around the boxers, and even get in the ring with them. It isn’t quite ready yet, but should be by the end of this year.