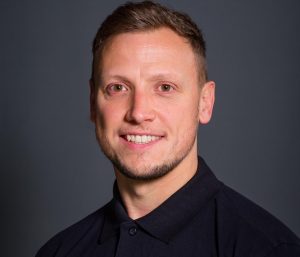 Blackmagic Design’s philosophy is simple — to help true creativity blossom. When it was founded in 2001, Blackmagic set out to change the industry forever. Since that date, the company has grown rapidly to become one of the world’s leading innovators and manufacturers of creative video technology. Our Sit Down with director EMEA Stuart Ashton started with an enthusiastic reflection on Las Vegas…

What particularly sparked the interest of visitors to your NAB stand when it came to sports broadcasting?

NAB was a great show for us. We saw a great deal of interest from the live sports sector. Our switchers, particularly, drew significant attention. The addition of the new ATEM Television Studio Pro 4K, plus the announcement that we made earlier in the year of the ATEM 4 M/E Broadcast Studio 4K sparked interest. Many people were very keen on finding out more and more about how they could integrate our live production equipment into sports broadcasts. The catalyst for that interest was the URSA Broadcast which we really pitched for live studio, live event and ENG applications. So, because we have a camera which has a fully integrated optical fibre back it means you can work at a great distance from the production truck. That, with the ATEMs, presented a very interesting package for visitors.

How does the new ATEM Pro 4K switcher fit into the production chain?

The integration and the relationship between the two product ranges – cameras and switchers – has become tighter than ever. I think we have seen a real step up in terms of the performance and capabilities of our live camera. It has a B4 lens mount, and with all of the functionality with High Dynamic Range that you would expect on a high performance live camera. You then look at that relationship with the switcher and all parts of the chain come back seamlessly. But you also have to think about the audio side of the switcher. Here there are a great many capabilities now built in – compressors, expanders, four frame audio delay, EQ, separate stereo and mono audio and so on. That switcher’s audio capabilities have had a real make over. We have noticed, especially in the sports world, that viewers are not just looking for more pictures, they are also expecting more audio feeds from, for example, different commentators.

Davinci Resolve goes from strength to strength. What innovations are incorporated into the latest version.

The two most significant areas are the integration of Fusion 9 and the Fairlight audio page. Fusion 9 gives full titling and paint control while also providing the ability to work within a compositing environment. This is especially useful for the sports world where there is a need for the creation of high quality titling which is easy and quick to generate, together with the ability to mask or paint out or carry out any cover up work. And then by fully integrating ADR audio into the Fairlight page, we can achieve much higher quality features than previously possible.

In the previous Sit Down, you advised caution about throwing out old facilities in favour of IP technology. Has your view changed in the last 12 months? 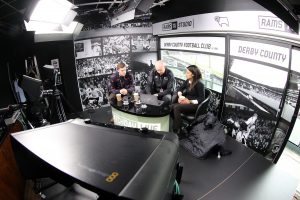 My general feeling is that we have made some small advancements in the industry, but we are still some way off when it comes to a full-scale changeover. I think there are certain regions that are looking at IP more closely than others. I still feel that we are predominately working over an SDI base infrastructure with the addition of optical fibre. IP will come, but at this moment there is still some vagueness about it and some trust issues that need to be overcome. Although it is a cheaper way forward, there is still a huge amount of upfront investment required users will need to consider.

Where do you think we will be with HDR by the end of 2018?  Or should we be looking further ahead for significant take-up?

We, as a business, have always had a strong focus on the technology because our cameras have always had High Dynamic Range and we have always supported an HDR environment. For the last four or five years the industry has been talking about resolution – trying to increase the pixel count – but I think what people are looking for is clarity and detail. HDR is certainly a step in the right direction. As we move towards the back end of the year, more people are going to be talking about HDR. In fact, we think the viewer gets more experience out of HDR than they would from 8K. However, on the flip side, when you look into things like high resolution for large screens, then you can see that is a direction where 8K can offer a solution. What will be interesting is when HDR and 8K start to converge further down the line.

What are the challenges facing you for the second half of 2018 and into 2019?

From our perspective, we are continuing to push very heavily on our cameras and new switchers. The landscape of the market is always changing and there will always be demands from content providers for something different. As a manufacturer, one of the difficulties is that you can sometimes get caught up in this, and you try to do everything that is ‘flavour of the month’.

In fact, what we have to do as a business is stay very focused and strong minded on what we believe our customers need today. One of the challenges we at Blackmagic always face is the volume of products we support across numerous markets and verticals within those markets. That means we can’t afford to neglect the different areas in our portfolio. So, we have to drive forward across all of our product lines.

Case studies are always of interest. Do you have a sports-related story you can share?

Led by head of broadcast, Matt Reeder, and Chief Technology Officer, Stuart Fisher, DCFC has taken the unprecedented decision to become one of the first Championship clubs to broadcast its own extensive coverage of its English Football League (EFL) fixtures, as well as a wide range of pre and post-match content via the club’s streaming platform, RamsTV. These enables the club to reach out to fans across the world.

In covering home matches, DCFC currently relies on eleven camera channels, but there is an expansion planned. The club has a dedicated studio setup where it can pre-record presenter links using three 4K studio cameras. There are a further two cameras on the main gantry at the halfway point and an URSA Mini 4.6K as a remote touchline unit, which is also used to for pre- and post-match interviews.

In addition, there are radio receivers on the touchline and at the stadium entrance for the teams’ arrival, plus a locked off Micro Studio Camera 4K to provide wide angle tunnel views. Interestingly, we have a good many Premier League and EFL Championship clubs using our solutions in some capacity already.

What will be interesting to see is how clubs from the Championship and down plan to take advantage of the EFL’s Digital iFollow initiative which takes effect in this coming season (2018/19). Essentially, the new deal hands back control of any match rights that haven’t been bought by a broadcaster. The only restriction that remains in place is that no 3pm Saturday games can be streamed domestically.