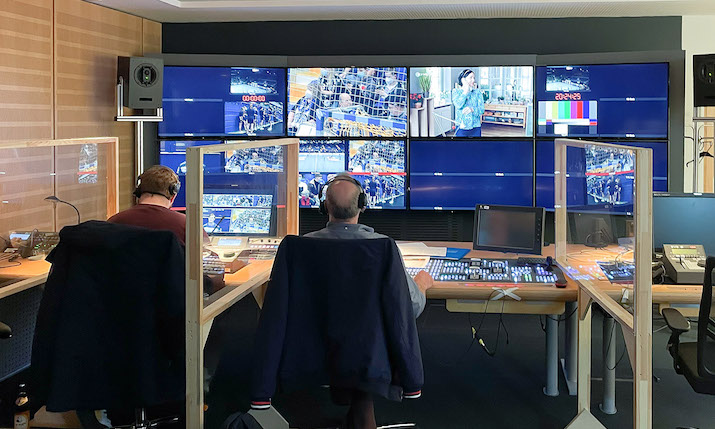 Since the 2020-2021 season, production service provider and studio operator Studio Berlin has been responsible for producing all matches of the EHF European League in Germany on behalf of Infront Productions and creating the world feed.

Since February 2022, Studio Berlin has been using a self-developed remote production concept for the men’s matches, using only cameras and atmo microphones in the venues. The actual production, including editing, control, integration of graphics and slomo, and the sound mix, is realised with a fixed control room at the Berlin Adlershof facilities.

After intensive tests, Studio Berlin and Infront Productions have decided to implement Studio Berlin’s new remote production concept for handball games covered by four cameras. This concept will also be used for games with up to eight cameras in the future.

The production format for the games is HD 1080i/50, stereo. Only the camera and audio signals are created on-site in the venues. Studio Berlin uses the infrastructure of network provider MTI to transmit the signals to the control room in Berlin Adlershof, running through a bidirectional connection with a maximum bandwidth of 100Mbit/s. Riedel’s Bolero is used for communication between the control room and the venue. For signal contribution, Studio Berlin uses the SRT protocol. Signal distribution continues to take place via satellite. However, the SNG is no longer located at the venue but at Berlin Adlershof.

Leveraging the remote production concept, Studio Berlin has drastically decreased the production effort for each game – while maintaining the same high production standard. In addition, the concept offers further advantages: on some match days, two games from different venues are produced directly one after the other – managed by the same director and the same staff in Berlin Adlershof. In each case, only the personnel for direction, slomo, image technology and audio are deployed in the studios in Berlin. An additional feature is that the graphics operator controls the graphics machine by remote either from the headquarters in Copenhagen or from the home office of the respective graphics operator. However, this is only the first step. In the medium term, the slomos will also be operated from the home office of the slomo operator.

Nick Zimmermann, managing director, Studio Berlin, commented: “With this workflow, which we developed especially for this production, we have taken a first, obvious step in introducing remote production services at Studio Berlin. Remote production has been a topic for producers and service providers for a long time, but it has not yet been implemented consistently and ready to go into mass production for these types of sports. Deploying this concept, Studio Berlin demonstrates its feasibility under the demands of an actual live sports production. The concept handles the available resources sparingly, without accepting a reduction in the usual production quality. For the Studio Berlin team and directors and camera operators, this resulted in a learning process, with working methods and processes being rethought and adapted. Together, we developed a workflow that functions and is a true alternative to using an OB van in many production formats.”

The remote production concept has an additional effect. Remote production and the resulting reduction in production efforts for technology, personnel, travel, hotel, energy and transport (all the venue equipment fits into a Sprinter plus trailer) allow Studio Berlin to realise another important goal that the company has set for itself. Condensed under the term Green Production, Studio Berlin consistently strives to significantly reduce its CO2 footprint in its productions. Thanks to the new concept, CO2 emissions from handball production have been reduced by two-thirds.

Peer Seitz, head of Infront Productions, said: “As Infront Productions, we strive to take efficient approaches to meet our clients’ needs and optimise our workflows. Accordingly, we always try to implement productions as regionally as possible to reduce our carbon footprint, among other tasks. We are even more proud that we can realise EHF matches with our partner Studio Berlin, using the remote production concept, and thus fulfil our ecological responsibility even better.”