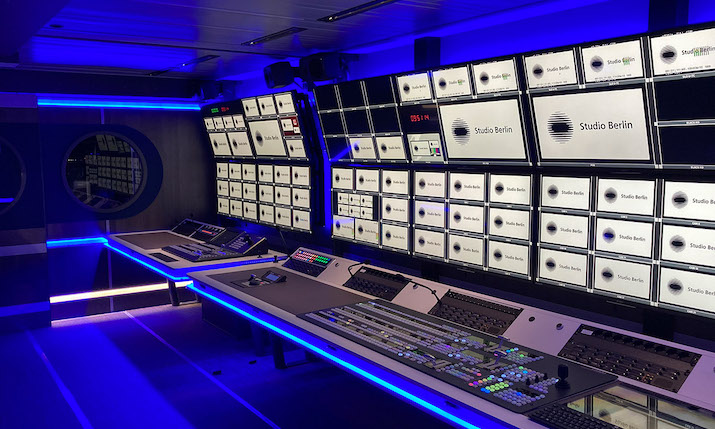 Germany-based TV production services company Studio Berlin has commissioned a new UHD HDR OB van, the U10, which has already been successfully used in the live production of the German Television Awards (RTL). With approximately 60sqm of working space the OB van offers up to 26 people sufficient space for a relaxed working atmosphere. It can work with up to 24 UHD cameras and partners with a modern support truck.

U10 is the second production vehicle (after the U9) that Studio Berlin planned and built with German system integrator Broadcast Solutions. The most significant innovation leveraged with U10 – and never implemented in this way before – is the separation of control room and technology. The technical components are not installed in the OB van, but instead are housed in a central equipment room in the support truck. A fibre interlink connects both vehicles.

Installing large parts of the technology in the support truck offers many advantages for productions and the teams in the OB truck. Outsourcing provides production teams with additional workstations and magnifies working areas. Therefore, minimum distances between workstations can be maintained, making acrylic glass shields expandable. The room concept also has positive effects on the flexible use of space during productions. The two control rooms can easily be transformed into one ample control space by moving doors and monitor walls.

The air-conditioning technology has also been simplified, thus reducing the noise level in the vehicle. With no separated air-conditioning circuits needed for the racks and the workspace, planners could concentrate entirely on aligning the air-conditioning system with the people in the vehicle – an essential factor in improving working conditions. In addition, the latest technical innovations are integrated by planning the air-conditioning system to filter germs and bacteria out of the air and blast them with UVC light flooding. The vehicle’s fresh air supply and air exchange rates are far above legal standards. Independent of COVID-19, these measures reduce the spreading of other contagious diseases when working in confined spaces like an OB van.

Nick Zimmermann, managing director at Studio Berlin, said: “With U10 we add another large vehicle to our UHD HDR company strategy, which started with OB U9 four years ago. We have built up a great deal of know-how in implementing high-quality productions in UHD HDR that are incorporated into the planning of U10. With this strategy, we provide our services at the highest technical level, especially in large UHD sports or show productions. In our view, for these productions, the classic OB van still has its right to exist, all the more if you pursue an innovative concept, as we have done with U10.”

U10 can realise productions with up to 24 Grass Valley LDX 86N UHD cameras and additional wireless cameras. The truck is equipped with a Grass Valley 12G K-Frame XP Compact vision mixer with Xtreme option. With two Grass Valley control panels accessing the vision mixer, a Karrera K-Frame 3 M/E in the main control room and a Korona 2 M/E in the second control room, users have maximum control.

Studio Berlin also opted for Riedel’s decentralised MediorNet router solution, which manages the video and audio signals and the multiviewers. At the heart of the two audio controls are Lawo consoles. An mc256 MK III (64 faders) with fully redundant UHD cores operates in audio control 1, with a Lawo mc236 (16 faders) console operating in audio control 2. Significant for sports productions is a large number of slow-motion servers. In U10, eight EVS servers or Grass Valley LiveTouch servers can be operated in maximum configuration.

Matthias Alexandru, CTO at Studio Berlin, said: “In principle, one can describe our approach using the slogan ‘The OB van as a workspace becomes a stagebox’. By outsourcing the technology, we gain space and reduce the air-conditioning technology as well as the overall weight of the vehicle. The room idea and technical workflow concept support a quick and ad hoc change of room sizes and structure as well as production workflows – keeping in mind that the OB works in different productions. Moving the racks into the support van gives us more flexibility to expand or adapt capacities. By outsourcing the racks, using the decentralised router concept and the adaptable room layout and leveraging our workflow concept for UHD/HDR productions, U10 prepares us perfectly for the future of TV productions.”

To further increase production reliability, U10 leverages a UPS buffer. In case of a power failure, U10 can maintain the entire production for 15 minutes on battery power. The UPS buffering gives time to react and change the power source in case of emergency, making it unnecessary to use a diesel generator in parallel – a further contribution to sustainable green productions.