Studio Berlin has moved to Ultra HD production with Ü9, a 4K/UHD Streamline OB truck built by Broadcast Solutions, which covered the recent German federal elections as its first production. The truck will mainly be used to produce entertainment (such as The Voice of Germany) and events (particularly concerts or awards ceremonies and other live TV shows), but it will also be used for sports, including Bundesliga football, winter sports and even beach volleyball.

Once Studio Berlin had decided to go UHD, probably the most crucial decision was whether to also go Video over IP or stick with copper. “During the planning phase, we asked ourselves whether Video over IP is the right path for us at the moment, or whether the proven copper technology still has its eligibility,” explained Matthias Alexandru, CTO, Studio Berlin. The implications of HDR, whether with or without UHD, were also an important consideration.

In the end, they decided against using Video over IP, since typical remote productions will not be the priority for this particular vehicle. “However, to process UHD signals and/or 3G signals within a larger production environment of the OB van, we decided to use Riedel’s MediorNet technology, where we mainly rely on the MicroN system,” because it offers many video inputs and outputs within a small rack unit footprint.

Studio Berlin’s existing workflows also had a major impact on the overall design of Ü9, but “it is important to us to revamp our workflows with new, up-to-date technology and to keep up with current developments. Often the production processes are determined by the customer, not by the production company. For us it is important to consult our customers with the introduction of new production processes, leveraging our experience and our knowhow. With Ü9, we now have a wide range of new possibilities at hand,” said Alexandru.

The OB truck is a Streamline S16, bringing the total of Streamline OBs Broadcast Solutions has built to more than 40, which it claims makes it “the most successful OB van series in the world”. The Streamline concept allows customers to opt for flexible technology choices for customisation, but uses proven, established room and design concepts that should offer increased reliability. The latest versions are fully capable of supporting UHD, HDR and IP-network workflows.

Because there are now so many Streamline OBs in use it “made it easier for us to adapt the room and work area concepts according to our needs,” added Alexandru. “The production costs, as well as the construction time, are significantly lower than for an entirely new, tailor-made vehicle. Take for example the air-conditioning. From the start, we were able to rely on a field-proven and functioning concept. The typical childhood diseases of tailor-made vehicles are thus eliminated.” 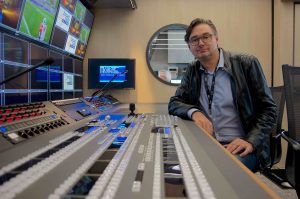 This Streamline approach “offers maximum flexibility in connection with technology and production workflows,” said Studio Berlin MD Nick Zimmermann. “The combination of cutting-edge system integration and field-proven overall concepts, applied by Broadcast Solutions, all come together in a production tool that perfectly serves our purposes.” Ü9 is just the first step in its 4K/UHD strategy, with more to follow, he added.

The choice of cameras and switchers for the Streamline OB trucks is down to the customer – “Within the boundaries of the given I/O counts of the different Streamline models most of the switcher manufacturers offer suitable models, giving the customer the freedom of choice,” explained Rainer Kampe, CTO Broadcast Solutions.

“The decision of which routing solution we integrate in a certain size of Streamline OB is based on maximum functionality and reliability at the best price,” he added. “The physical I/O count and the needed amount of multiviewer PiPs (we always use router-integrated multiviewers) are the basis of the router selection: typically, a fully equipped router frame gives the best value for money. For example, for the S12 or a S8UHD a fully equipped (no single empty slot) Imagine Platinum router is our choice.” For other Streamline sizes other manufacturers’ router frames can be used, due to their better fitting frame sizes.

However, Kampe admits that Riedel’s MediorNet “is the right choice when stagebox connectivity or the option of networking or trunking other trucks is key. All upcoming standards are on the roadmap and we believe in the system’s upgrade path.” Broadcast Solutions’ knowledge of MediorNet and its elaborate system design “makes the integration for us easy and smooth.” Although the capex is likely to be higher than for a standard solution, he believes the total cost of ownership makes it a good choice.

“When designing our systems, we look for the best overall functionality,” he added. “Certain products may be outstanding in some technical terms, but sometimes they seem to be designed by engineers for engineers and not for users. For us interoperability is key, an OB van is a team of devices, therefore we look for the team players. Needless to say that top-notch technological highlights are the icing on the cake for every broadcast engineer, so our goal is to integrate them seamlessly in our OB vans’ workflow where appropriate and affordable.”

For him, the key metrics that every equipment choice needs to meet are: reliability; ease of use for the operators; redundancy; straight-forward system design; and best connectivity.

Out to Grass for cameras and switchers

The 19-camera UHD OB truck represents a big win for Grass Valley, from which Studio Berlin bought 41 LDX cameras, plus six K-Frame Video Production Center UHD-capable switchers for both its new OB trucks (Ü9 is just the first) and studios. The camera purchase is part of a three-year contract with Grass Valley, and Studio Berlin plans to substitute a significant total of 70 LDK Cameras with the new LDX models within that period.

“We are a Grass Valley company for a long time,” said Zimmermann. “We are very satisfied with the products and services of Grass Valley over the years, and the cameras and switchers have proved their sustainability during all our productions.” 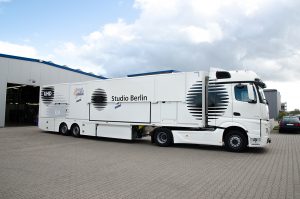 It means “we can now provide a native 1080p or 4K HDR acquisition in both SMPTE 2084 (PQ) and Hybrid Log-Gamma formats. And thanks to Grass Valley’s GV-eLicensing model, we are now able to provide up to 23 XtremeSpeed (6x super slow motion) cameras if needed,” added Alexandru.

Besides using Riedel’s MediorNet as a decentralised signal routing and communications backbone (with five MetroN Core routers plus 17 standard MicroN and 12 multiviewer MicroN systems), Ü9 is also equipped with six video stageboxes, using MicroN to control network, communication and GP I/Os – as well as video signals. In case the number of stageboxes is not sufficient for a complex production, additional MicroN stageboxes can be integrated into the system without complex configuration.

These give Ü9 all the expansion possibilities to handle large show or sports productions without requiring intense production preparation.

For audio, “we rely on Lawo’s technology approach, which is established within the company. The Lawo mc256 is a powerful live production console and can be used universally for any production,” said Alexandru. It is used with a Nova 73 audio matrix, with Genelec and Geithain 5.1 audio monitors. The KVM matrix is by Guntermann & Drunck, with a Riedel Artist 128 plus 32 intercom matrix working with Riedel RiFace and Motorola wireless talkback.

It has four EVS XT3/XT4 slomo servers, 8/4 channels each, with Lawo VSM control systems, including Tally, plus Axon, Imagine Communications and Riedel processing. For test and measurement it has Leader LV5333 and Phabrix PHQX video systems and RTW for audio.

Broadcast Solutions has been working on the Streamline concept since 2011, continually refining it and adding new capabilities, but where does it go next?

“Due to our knowledge gained in building the world’s first 12G OB van in 2016, we investigated and pushed this technology,” replied Kampe. “We see more and more 12G equipment on the market and strongly believe, that for our small and medium size trucks, 12G is the right technology, making the switch from HD to UHD easy. The concepts and the system design are ready, and the first projects will take off soon.”