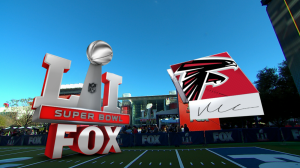 The biggest and most important game in American Sport is the Super Bowl. This year, Fox Sport relied on the stYpe camera tracking system to deliver augmented reality for this massive event.

Through Super Bowl week in Houston, Fox Sports preset various augmented reality packages from its giant 50-foot Techno crane inside Discovery Green leading up to the Big Game. Huge AR graphics were placed near the field using the Stype kit on a Techno crane and rendered with Vizrt’s Viz virtual studio. Extraordinary 3D graphics of the players and game’s results delivered a special experience for the Fox Sports viewers of this year’s Super Bowl.

According to ‎Zac Fields, Senior Vice President Graphic Technology and Innovation, augmented reality has continued to be a focal point for Fox Sports, with Super Bowl LI “continuing the theme of pushing this forward.” Virtual images can be placed anywhere inside the park on shows such as The Herd, Speak For Yourself and FOX Sports Live, to name a few. “There’s quite a bit of work done on the front end to create the photorealistic 3D graphics that really make these things shine,” he added.

America hasn’t changed that much; the New England Patriots are the Super Bowl champions once again. But this year’s production by Fox Sports and partners stYpe and Vizrt, changed the whole Super Bowl experience for the viewers with their photorealistic 3D graphics.