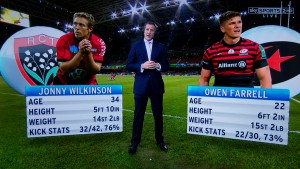 Sky Sports used Vizrt graphics and StypeGrip 3D virtual studio technology to create innovative augmented-reality graphics to its presentation of the Heineken Cup rugby final. The StypeGrip tracking software allowed the graphics to be locked to the movements of the remote camera head, however it was panned, tilted or zoomed.

Sky had used the system once before, during the semi-final at Twickenham, but for the final it added head-to-head graphics of opposing players, with statistics, allowing the presenter (Will Greenwood) to stand between them and, however the camera moved, the graphics remained relative in size and position to him.

The system was operated by Alston Elliot, which bought the system to map augmented reality graphics (such as the eye-catching ident with the trophy) using data from a camera head on a Jimmy Jib, “so the graphics remain stable in relation to the pitch,” explained Stuart Coles, its Sales Director, EMEA.

The Croation-based StypeGrip had sold a similar system to Fox Sports in Australia, which is where Cole saw it initially. Alston Elliot has also bought a second system for South Africa’s SuperSport, for studio presentation for the World Cup. 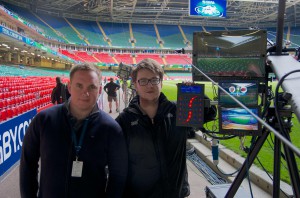 Sky Sports’ Executive Producer for Rugby Union Gus Williamson liked Stype as soon as he saw it, and was quick to bring it in to help cover the semi-final, “but now we’ve had a bit more time to finesse it further,” he said.  “We’ve seen VR stuff on Monday Night Football in the studio, but this gives us VR in the OB environment. However, we’ve got to make sure it’s not a gimmick, to use it discreetly and correctly in the right environment, to make people think ‘that’s amazing’,” he added.

There is typically an hour’s build-up prior to the match, and there is very little happening in the background for the first ten minutes or so before the players start to warm up, which is where technology like this helps. “I think Stype is really interesting. It’s a way of getting more information across. It’s a way of making statistics sexier,” said Williamson.

Cole likes that it doesn’t need a specialist camera system. “The beauty of it is it just adds on to an existing camera, and it’s a relatively cost effective way of producing augmented camera graphics,” he said. “There are other systems, but they are more complex and more expensive. It’s all about set-up time — we’ve turned this around very quickly,” with calibration taking only ten minutes. “A lot of other systems wouldn’t be robust enough to use in an OB environment,” but this is practical enough for one-off events, he added.

The system allows the camera to move over, through or around the Vizrt graphics. “The 3D objects remain in perspective,” said Cole.

The StypeGrip system was added to a standard Jimmy Jib, with two encoders on the pan and tilt head, and two more on the tripod mount for X and Y positions, which then send the tracking data to the truck. “It can move in 0.1º increments, to track even the tiniest of movements,” said David Wholey, project manager. The Vizrt system can also match lens data and Vizrt provides data on many lenses, however, before the semi-final Alston Elliot did a full half-day calibration of the lens themselves, to ensure that “the graphic doesn’t change unless you want it to change in the van,” he added.

“We’ve seen demos of it on a Jimmy Jib on rails that got some pretty striking results. There’s a lot of potential for this system,” said Wholey. Coles also believes it can add value to studio productions.

Alston Elliot had 15 personnel and four vans in Cardiff for the rugby: one for pres and match graphics for the Amlin final; one for 2D coverage of the Heineken; another for the 3D broadcast; and the Stype van. “It’s the biggest single operation of the year,” said Cole.

There had been some issues during the semi-final, with instability of the jib base and arm, but this was solved by adding anchor points and stays on the arm. “You want as little movement as possible,” said Cole. The only problem at the final was that they had to move the jib before the match started, to preserve the view for spectators.

“The Stype Kit interface has automatic aiming, which is useful if the cameramen aren’t trained. It can save ten positions, so the camera will always remain fixed on the target no matter how you move it,” explained Wholey.