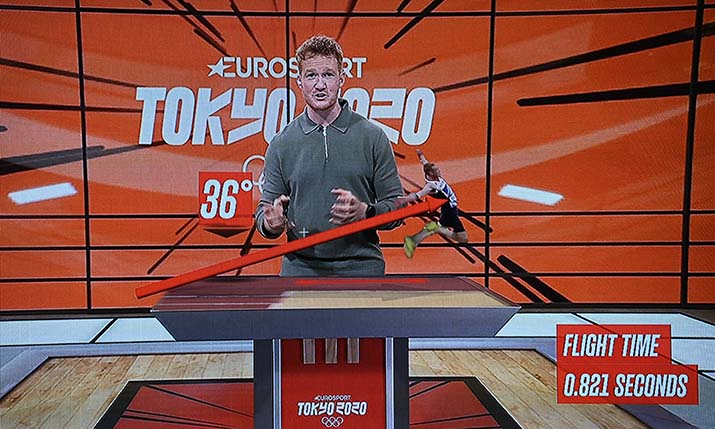 As the dust settles on a memorable Olympic Games Tokyo 2020, the live action from across the globe continues. Starting with the final Grand Tour of the year – La Vuelta a España – and ending with the men’s singles final at the US Open, Discovery Eurosport will broadcast well in excess of 500 hours of live sport across its linear, digital and DTC platforms.

La Vuelta (14 August – 5 September) has already kicked off an action-packed month of sporting drama while the 89th edition of the 24 Hours of Le Mans (21-22 August) returns to Discovery’s screens. The US Open (30 August – 12 September) from Flushing Meadows in New York will also be shown live exclusively across discovery+ and Eurosport across Europe as Novak Djokovic bids to become the first player in over half a century to win each Grand Slam in a calendar year.

Scott Young, SVP content and production, Discovery Sports, said: “Building on our coverage of the Olympic Games Tokyo 2020 where we engaged millions of people across Europe with our world-class content and storytelling, we are set to continue to super-serve sports fans with even more live action from some of the biggest events in the sporting calendar. We have some of the best presenters, experts and commentators in sports broadcasting, unlocking each sport by sharing their knowledge and telling the stories that matter.

“With over 500 hours of live sports coverage over the next month alone scaled to the widest audience via Discovery’s channels, and with even more content available across our range of digital platforms – including on discovery+, the Eurosport app, the MotorTrend app and GCN+ – we will continue our summer of sport by bringing to life La Vuelta, 24 Hours of Le Mans and the US Open for fans to enjoy while building momentum ahead of another huge year of sport in 2022.”

Discovery’s live coverage of La Vuelta – across Eurosport, discovery+ and Global Cycling Network (GCN) – is complemented by original shows that go beyond the live action. The Breakaway (UK, the Netherlands and Denmark), fronted by Orla Chennaoui, features unrivalled analysis from some of the finest minds in cycling, including Sir Bradley Wiggins, Mark Cavendish and Sean Kelly. La Montonera, Eurosport Spain’s flagship cycling show, is spearheaded by the legendary three-time Vuelta winner Alberto Contador while Eurosport France’s Rois de la Pédale also continues for the third and final Grand Tour of the year.

As well as live and on-demand coverage of the Vuelta, GCN is offering fans long- and short-form highlights on GCN+ in multiple languages as well as a host of polls and quizzes on the GCN app to engage fans throughout all 21 stages of the race.

La Vuelta is broadcast across the Discovery network in Europe and Asia with total exclusivity except in Spain, Belgium, Denmark, Netherlands and Norway.

The build-up to the jewel in the year’s endurance racing crown – the 24 Hours of Le Mans – starts with an exclusive 30-minute documentary to premiere on Eurosport and available to stream via discovery+. Featuring interviews with drivers past and present, journalists and motorsport identities of years gone by, Race to Le Mans outlines in detail what make this particular event what it is today.

Alongside presenters Lesly Boitrelle and Guenaelle Longly, nine-time Le Mans winner Tom Kristensen and Top Gear USA’s Jethro Bovingdon will front Discovery’s programming which will include live coverage of Free Practice, Qualifying and the race itself, which is set to feature some of motorsport’s best-known superstars including Paul Di Resta, Anthony Davidson, Robert Kubica, Juan Pablo Montoya and Kazuki Nakajima.

While Eurosport will offer exclusive coverage of 24 Hours of Le Mans across its channels and digital platforms in more than 50 markets across Europe and the Indian subcontinent, Discovery’s MotorTrend TV will show exclusive coverage for US viewers with the action available on Velocity in Canada. discovery+ will also screen the race via Eurosport and MotorTrend TV in available markets.

For the US Open, Eurosport – with every match and every court available to watch – will have every angle from New York covered in 2021 across Europe. Barbara Schett and two-time Grand Slam finalist Alex Corretja will spearhead Eurosport’s coverage from the brilliant Cube studio in London with seven-time Grand Slam winner Mats Wilander on-site at Flushing Meadows. Mischa Zverev will also be serving up analysis and commentary along with completing new tasks around the grounds as part of Eurosport’s Mischa’s Missions series.

Boris Becker will front Eurosport’s coverage of the US Open in Germany while Justine Henin will offer her expert analysis for viewers in France. Becker and Henin will both guest on Eurosport’s international European coverage throughout the tournament to offer expert opinion on some of the key storylines and talking points from New York.

Supplementing the 300 hours of live coverage will be a host of new and original programming and formats. Featuring interviews with Eurosport experts and assorted guests from the world of tennis, Novak’s Everest centres on Djokovic’s bid to complete the Calendar Slam – a feat that has not been accomplished since Steffi Graf in 1988 and since Rod Laver in 1969 in the men’s competition.

Motorsports, snooker and a host of cycling events from across the globe also form an integral part of live sports coverage across the Discovery network in August and September, including:

Discovery’s summer of sport continues to set new audience engagement and reach records. Its coverage of the Olympic Games Tokyo 2020 reached more than 372 million people across Europe through Discovery’s channels and platforms, and via its sublicence partners and free-to-air national broadcasters. More than 1.28 billion minutes of Discovery’s Olympics content was also streamed across discovery+ and Eurosport’s subscription services, which is 21 times more than its previous Olympic Games coverage from PyeongChang 2018.