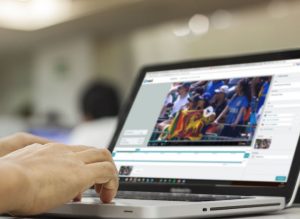 One of Sunset+Vine’s requirements involved distributing four different bitrates to Akamai ingest points in Australia and Singapore. The Tellyo team helped deliver the required customised production setup for broadcasting these high-quality streams to millions of viewers around the world, including audiences of fox.com and Cricket Australia’s website, cricket.com.au.

David Stranks Exec Producer Digital at Sunset+Vine, said: “The two-day event and its fast format doesn’t allow much time and we had to work quickly and smoothly. Tellyo gave us the speed of deployment we required, and the reliability and strength of its streams were outstanding.

“With the customisations for Akamai, the Tellyo team helped us immensely by developing adaptations within their infrastructure to meet our streaming requirements for all destinations. Working as our partner throughout, Tellyo’s team helped us achieve what was needed to get the best quality coverage of the Sixes, ensuring the event was a huge success.”