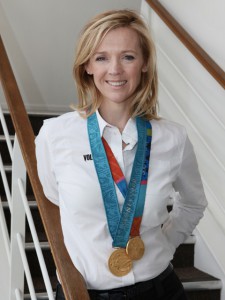 Sunset+Vine|APP the Oxford-based unit of the multi-award winning UK independent TV sports production and media company Sunset+Vine, has announced the creation of a specialist Women’s Sports unit. The new department will be headed up by Lisa Hynes, a former head of news at Sunset+Vine|APP, who rejoins the company after a stint with Landmark Films, where she was a senior producer.

The introduction of the new department comes follows several significant wins for Sunset+Vine|APP over the last 12 months, including commissions from BBC Sport to produce coverage of the UEFA Women’s EURO 2013 as well as England’s five home matches in the current Women’s World Cup qualifiers. The Women’s Sport Unit is working with federations, athletes and broadcasters to develop a roadmap that will broaden the appeal of women’s TV sport to viewers, advertisers and sponsors alike.

As part of that development, double Olympic sailing gold medallist Shirley Robertson OBE has joined the team as associate producer. Robertson will have a dual role of supporting Lisa in the development of the women’s sports business as well as further enhancing the company’s sailing credentials in the lead up to the start of the Volvo Ocean Race 2014-2015, for which Sunset+Vine|APP is heading the production and Sunset+Vine International is the global distribution partner.

Andrew Preece from Sunset+Vine comments: “The past twelve months have been significant ones for our business. Major wins of the Volvo Ocean Race and of Women’s football set into motion plans to broaden the base of our offering from which we are already experiencing additional growth and new opportunities. Attracting talent like Shirley Robertson to Sunset+Vine|APP and enticing Lisa Hynes back is a great vote of confidence in the team. This coupled with securing the editorial and story-telling expertise of Chris Luke and the top level America’s Cup experience of Jonathan Edwards makes our proposition stronger than ever.”