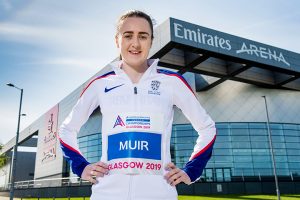 The 2019 European Athletics Indoor Championships has appointed Sunset+Vine to be the host broadcaster for the 35th edition of the competition taking place at the Emirates Arena, Glasgow from 1-3 March 2019.

Under the terms of the agreement, Sunset+Vine will produce the world feed for the championships, where the very best of Europe’s athletes will feature in six sessions over three days of competition.

Billy Garrett, Director of Sport and Events at Glasgow Life and Co-Chair of the Glasgow 2019 Steering Committee, said: “I am delighted Sunset+Vine has been appointed as host broadcaster for the 2019 European Athletics Indoor Championships. With their reputation and experience of working with major live television sporting events, we are confident in our decision to appoint them. We want the excitement and drama of the Championships to be seen all over the world by those athletics fans who can’t be in Glasgow and we are sure that Sunset+Vine will deliver this”.

Jeff Foulser, chairman of Sunset+Vine, said: “It’s a great honour to be the host broadcaster of this prestigious event and to continue our long-standing relationship with the City of Glasgow, which includes very happy memories of the Glasgow 2014 Commonwealth Games. Our team for this event includes key members of the team that successfully delivered the London 2017 World Athletics Championships. We can’t wait to get going again.

Paul Bush OBE, VisitScotland’s director of events, said: “We’re delighted to have Sunset+Vine on board as the host broadcaster for the Glasgow European Athletics Indoor Championships 2019. Having worked with them previously on events in Scotland, including the Commonwealth Games and last year’s Badminton World Championships, and with Emirates Arena providing the perfect stage we know they’ll do a great job in showcasing the athletics action to fans around the world.”

The Sunset+Vine team will be led by Michael Cole (Executive Producer) who will be supported by Helen Kuttner (Director). The technical operation will be headed by Mark Dennis.