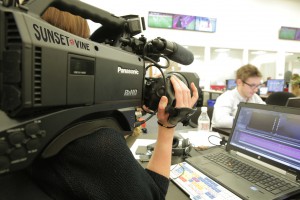 Sunset+Vine is the first UK broadcast company to invest in new Panasonic AJ-PX5000 and AJ-HPX270 cameras. Sunset+Vine is an in-house production partner for BT Sport and will use the new cameras on Barclays Premier League and Aviva Premiership Rugby for the broadcaster, as well as on the upcoming Commonwealth Games for the BBC.

The new PX5000 ENG style camera has already been deployed on a number of productions. Mark Dennis, director of technical operations for Sunset+Vine, said: “Panasonic’s P2 Technology was a significant factor in our decision to buy these cameras. Its reliability and simultaneous recording enables secure backup across two cards.”

Andy Beale, chief engineer at BT Sport, added: “The AVC Intra codec helps us to get our content to air quickly, which is essential in a 24/7 sports environment. As the first fully DPP compliant broadcaster, BT Sport has deployed a transcode-free end-to-end AVC workflow.”

Nigel Wilkes, Broadcast group manager at Panasonic, commented: “We’re delighted to be working with Sunset+Vine, through one of our dealers Broadcast & Production Services (BPS). “We’re proud that our cameras, and our AVC Ultra codec, will play such a significant part in their broadcast workflow.”

The PX5000G is designed to meet the new needs of broadcasting in a networking age. In addition to conventional P2 card slots, the PX5000G is claimed to be the first camera recorder to offer a microP2 card slot, reducing media costs.