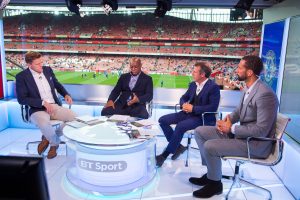 Global TV sports producer and distributor Sunset+Vine’s relationship with BT Sport commenced in 2013 and will now run through to 2022 at least, after news emerged last week of a further four-year contract. The deal will see Sunset+Vine produce more than 1,200 hours of live event and magazine coverage per year from 2018, with an increase in the amount of rugby-related output expected to be among the most notable developments.

A team comprising more than 80 staff will continue to be based at BT Sport’s studios in Stratford, London, with specific teams assigned to rugby and football. Freelancers and additional personnel are added as schedule demands require, whilst Sunset+Vine also retains its team in Scotland for BT Sport’s coverage of the Scottish Premiership.

Other specific tournaments and championships included in the deal include all of BT’s live Premier League and UEFA Europa League football, along with its entire rugby offering of the Aviva Premiership, European Champions Cup, European Challenge Cup and Rugby Tonight show. Sunset+Vine will also be covering Australian professional cricket in the form of Big Bash League and Women’s Big Bash League matches.

Jeff Foulser, chairman of Sunset+Vine, commented to SVG Europe that the additional commitments related to BT Sport’s extended Aviva Premiership rights are likely to be the cause of the most significant logistical challenges in the future. “There will be a lot more rugby to cover – as many as six live matches per weekend in certain weeks,” he says. “So there will be some serious planning issues to consider there, but we have an excellent team in Stratford run by executive producer Titus Hill. They work well in advance – for example, they are already planning next season although this season is not over yet – and that is [obviously beneficial to live ops].”

Maintaining a consistent dialogue is vital to the success of any long-term professional relationship, and Foulser confirms that regular Tuesday meetings with senior BT management are a key part of the schedule. “At each of those meetings there is a thorough discussion of what happened the previous weekend and whether it raised any specific issues that need to be addressed,” he says. “We have a terrific relationship with BT Sport – they trust us to get on with the job. Of course, they make comments when they need to, but the old saying of ‘if you have got good people then let them do it’ very much applies here.”

But there is always room for improvement, and Foulser says that looking ahead “there is a plan and a will to [encourage] more cross-fertilisation between teams where some of our people work on their stuff – and vice versa.” As well as enhanced exchange of ideas, the hope is that this will also lend the collaboration the sensation of being “a sort of homogenised unit, really”, although in many ways the two operations are already closely integrated.

With regard to long-term vision, Foulser says that he and other senior Sunset+Vine personnel are kept abreast of BT Sport’s plans, although more generally he anticipates continued efforts “to increase the number of eyeballs accessing their content, which clearly makes it more viable for them and makes a lot of sense.”

The recent merger of EE into BT’s consumer division – which was revealed in August 2017, some 18 months after the £12.5 billion acquisition of EE was completed – is bound to be a primary facilitator here as BT seeks to broaden the reach of BT Sport’s content beyond the paywall.

But even before the next contract begins, Sunset+Vine and BT Sport are working on brand new events, including the first-ever Power8 Sprints. Bringing the kind of shorter time-frame, broader-reach approach that has done wonders for the profile of cricket and rugby, Power8 Sprints is a new rowing tournament that will see crews from eight cities (Bristol, Cambridge, Exeter, London, Manchester, Newcastle, Nottingham and Oxford) go head-to-head to determine the winners of men’s and women’s events. The debut meeting – in which each 350m race is expected to last just one minute – will take place in Bristol on 22 July.

Sunset+Vine has been in conversations with British Rowing for about 18 months, says Foulser, and Power8 Sprints underlines the fact that associations across different sports are “looking for new ways to attract and grow audiences. When [British Rowing] approached us they already had a good idea of that they wanted. We really hit it off from the word go, and between us we [worked on developing this new event].”

There will be no charge to spectators to watch the races in Bristol, and Foulser is hopeful that the short-course rowing format – “which is all about power and speed” – will help endear the sport to new fans. “I am confident that we can capture the effort, energy and emotion that goes into [rowing]. Through our relationship with BT Sport they are going to televise it live” and there is already some talk about expanding the event in the coming years, adds Foulser.

British Rowing CEO Andy Parkinson is similarly enthused, remarking that “fans tuning in can expect to see short, fast and dramatic racing, with plenty of close contact between the crews. It’s a rowing TV broadcast like you’ve never seen before and is an event not to be missed.”