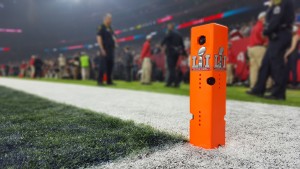 Admiral Video was on hand at Super Bowl LI with PylonCam 2.0, the next-generation (and patent-pending) system that had been revamped a bit by moving the cameras to the corners of the pylons to provide different angles of coverage from the previous version.

“To move the lenses to the corners required a rethink on our internal structures, and there was a compromise on the strength issue,” said Admiral Video President Paul Halsey. “Since we have yet to have one get obliterated on national TV, I figured we could trade a tiny bit of strength to greatly improve the shots we got.”

Halsey says the new angles also help the EVS operator build a two-camera playlist. “We can show the player approaching the goal line on one camera and then cut to the other camera and show him rolling across the line, which is very cool.”

Audio for the PylonCams is handled externally because there is no room within the pylon for microphones. Also, if the pylon has an integrated microphone and gets disconnected, audio coverage would abruptly cut off.

“Given the typical amount of time we get for a replay,” Halsey noted, “it is very difficult to actually get a full-speed replay with sound. However, the audio department loves the mics for on-field natural sound.”

He adds that he was excited with how Fox Sports put the cameras to use and the number of replays from them that made it to air, including the crucial winning touchdown. “Sports viewers will be watching our Super Bowl PylonCam overtime-touchdown replay for a very long time.”

What’s next for the PylonCam? Halsey’s wish list includes high-speed recording as well as 4K, both of which are currently unavailable in the size required.

“We are hopeful,” he added. “We are also very interested in working with stadiums to get our infrastructure installed. For safety, cost, and reliability, we are committed to staying with a quick-disconnect wired system.”