Super Bowl LIV featured a super presence by Game Creek Video, with 19 trucks and 45 technicians on hand to support Fox Sports, NFL Network, and ESPN. And, when it came to the production of the Big Game itself, Game Creek Video was front and centre with 10 trucks supporting the Fox Sports efforts at Hard Rock Stadium. 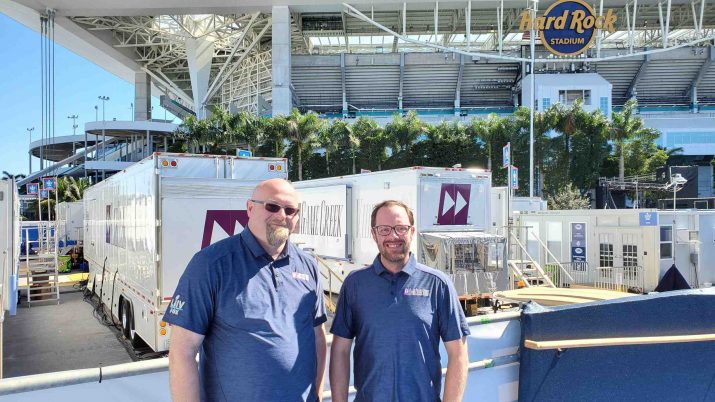 “The game coverage [was] produced out of Encore A, B, and C with support out of Edit 4 for things like audio sub-mix, 4K, mixed reality, and pylon shading,” said George Bailie, engineering manager, Game Creek Video.

“Cleatus A and B [handled] the pre-game show while Edit 2 [supported] the pre-game, pre-game audio sub-mix, 8K, and vendor support. Bravo [did] the kickoff show and was also our primary backup to Encore, and B5, which was at Opening Night earlier in the week, has now joined the mix onsite.”

Getting the core trucks in place took a lot of travel, especially because the NFC Championship Game was in San Jose, CA, just two Sundays ago.

“It was almost the last place you would want that game to be played, given the need to get here, and it resulted in an abbreviated setup schedule here,” said Bailie.

“But a massive number of drivers moved Encore, Cleatus, Edit 2 from the West Coast to here in 60 hours. Not enough credit can be given to that side of the effort.”

One challenge in the setup was that there are three compounds: one right next to the stadium, where Encore and Bravo A were located; a second compound, where the remainder of Fox’s trucks and trailers were located; and a third, international compound. Game Creek’s Gridiron was there to support ESPN’s domestic efforts on Super Bowl Sunday.

The result was what Bailie believes is more miles of fibre transport in a footprint this size than anything that he has ever done.

“It’s not just the cameras but the data and audio. Even truck-to-truck muxes had to be broken out so they could be shipped across the street, and that’s a heavy lift.”

You can read the full story here on SVG USA.