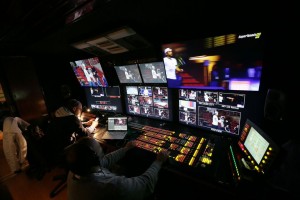 A leading name in European tennis broadcasting, SuperTennis is the TV channel of the Italian Tennis Federation and is available to view (for free) on digital TV channel 64, Sky channel 224 and Tivùsat channel 30, as well as simulcast streaming on the SuperTennis website.

One of the channel’s most recent productions, ‘The Great Challenge 4’, was held at Palapanini of Modena and involved legendary players John McEnroe, Mats Wilander, Henri Leconte and Sergi Bruguera. It was captured in the new 4K Ultra HD format.

In fact, the final day of the event, Sunday 22 November, was broadcast live in Ultra HD on multiple channels at 50 frames per second and with 10-bit colour. SuperTennis head of production Alfredo Nardoni spoke to SVG Europe about the technical challenges involved, as well as the long-term outlook for 4K.

Explaining his own role, he remarks: “I take care of the choice of technologies to be used in production, both from the operational and production sides. SuperTennis is edited by an external company, Sportcast, which is 100% owned by the Italian Tennis Federation. The company produces all TV content for the SuperTennis channel, but also for external companies, federations and broadcasters.

“Sportcast [was established as] a subsidiary of the Italian Tennis Federation. The production and playout structure is physically placed inside a well-known production company, SBP. There is also a broadcast studio and various editing suites.”

For the latest 4K production, Sony cameras were at the centre of the action. The production facilities used were those of DBW, while Globecast took care of the satellite segment, NTT handled the HEVC encoding, and Eutelsat undertook satellite distribution.

Four cameras were in the field: one and two on the short side of the court, located on scaffolding; three and four were situated near the net and opposite the players’ bench. The cameras used were Sony HDC-4300s and F55s, with short lenses, while slow motion and replay technology was utilised. The video server equipment was also developed by Sony.

Filming in 4K is ideal in tennis, says Nardoni, “because the ball is very small and so the screen resolution is crucial to be able to better follow the match. The feed in 4K was downgraded to HD for the SuperTennis channel and, again automatically, downgraded to SD as required.”

The transmission requires a very wide bandwidth but HEVC encoding is highly efficient, with the signal encoded to ASI in excellent quality.

Nardoni comments: “In my opinion 4K is [undergoing a phase similar to that during the introduction of] HD when encoding [techniques] were not definitive and the industry started with the ‘HD ready’ format – [but only] later moved to HD. Today apparently 4K seems to be an easy matter, just using two HD signals, but again it seems difficult to agree on what formats to use… and people are already talking about 8K,” says Nardoni.

“Since in practice it is only a multiplication of lines of the video, [some people have suggested a transition direct] to 8K, perhaps jumping 4K. Even the name, 4K or Ultra HD still causes disagreement.

“[On the positive side] contrary to what happened with stereoscopic 3D – where there were problems relating to illumination, depth of field, panoramic factors (to avoid creating visual fatigue in the viewer) – there are no problems in 4K, and also rapid movement does not create particular issues.

“From the home user side, in the case of HD, the bigger the TV set the better the image. Today, however, to view the 4K signal [in the most optimum way] even with a very large screen (60”), the viewing distance should not be that great. Meanwhile, buying a 4K TV at the moment may be premature as the coding technology [continues to be] updated and TV manufacturing giants must first agree on the actual code to use [in a definitive way].”