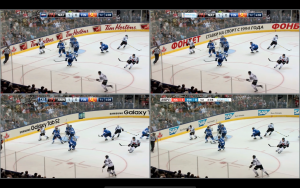 Supponor has confirmed that its Digitally Enhanced Dasherboards (DED) have been used throughout the latest World Cup of Hockey in Canada. The company’s augmented reality technology has been embraced by all the key stakeholders: the league, its broadcast and media partners, sponsors and fans.

According to a Supponor spokesperson, “dasherboards – or rink boards – are the key signage asset in hockey broadcasting, and they have ‘come alive’ in this tournament as never before. Sponsors are enjoying moments of exclusivity as their messaging ‘takes over’ the entire rink; broadcasters are engaging fans with creative content such as team celebrations, tune-in announcements and even personalised messaging.”

For example, Rogers Sportsnet has been personalising the boards for super-fans and driving engagement via Twitter hashtags.

For viewers around the world, who have been noticing the use of the Digitally Enhanced Dasherboards used to suit their own language and brands, Supponor is offering a first chance to see a simulcast of all feeds at once via its website (https://www.supponor.com/2016/09/digitally-enhanced-dasherboards-for-wch-2016-group-stages). The integration of virtual board advertising with show presentation can also be seen, with messaging tied to commentary and dynamic content to celebrate winning moments.