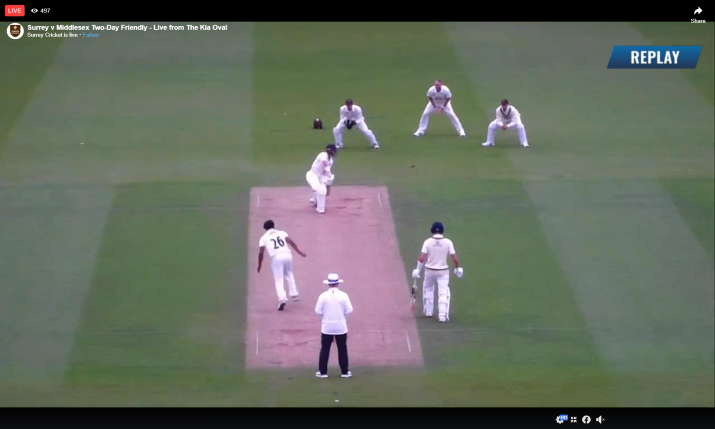 Spectator sport returned to the UK this week with the government supervising a series of three trials of live sport with fans present.

The first tentative tests overseen by the UK Government’s Department Of Culture Media & Sport (DCMS) took place at The Oval with a two day friendly between Surrey and Middlesex on Sunday 26 and Monday 27 July.

Altogether, 1,000 tickets were issued for the trial, which 10,000 members of Surrey County Cricket Club attempted to claim in the first hour of release.

Both days have been streamed live to the Surrey Facebook page using Facebook Watch – used for the first time by the Club less than one week ago – and on the Club website, kiaoval.com.

This use of Facebook Watch is new to Surrey County Cricket Club, which first broadcast a London Cup match to the social media site last week on Wednesday 22 July, with Surrey Women and Middlesex Women.

The Club partnered with its existing provider for the broadcast, Bristol-based video technology company, My Action Replay, utilising its automated video product and platform for live streaming, video indexing and social media broadcasting.

Other than games selected for broadcast by Sky Sports, every Surrey home game in the Bob Willis Trophy and Vitality Blast will be available to watch, free of charge on the Surrey County Cricket Club Facebook page, on smart TVs using the Facebook Watch app and on the official Surrey website, kiaoval.com. Fans without Facebook accounts will be able to access the coverage via the Club website.

Jon Surtees, head of communications at Surrey County Cricket Club, said, with reference to last week’s streamed women’s match: “County cricket has always had a large and dedicated online following and we’re excited to be taking this to the next level.

“Partnering with innovators like Facebook and My Action Replay has allowed us to make some big improvements to what fans have enjoyed for the last few years – and to add more interactive elements to our broadcast to allow them to play an even bigger part than before,” he noted.

The next trial of fans present at live sports events in the UK is the World Snooker Championship at Sheffield’s Crucible Theatre from 31 July. That will be followed by a trial at the Goodwood horse racing festival – known as Glorious Goodwood – on 1 August.