SVFE 2018: Design and operational trends for stadiums present and future

In recent times the increased expectations placed on new stadiums and arenas has led to much closer cooperation between architects, venue operators and developers. This panel explored how understanding the requirements of modern sports venues and designing them to be adaptable and flexible is key to ensuring that they meet the differing expectations of operators, sports people and spectators alike. 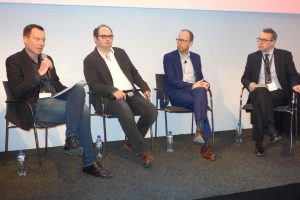 The relationship between architects and operators, and getting those operators on board early, is key for stadium success observed John Sheehan. Why do we still see so many projects starting without that key cornerstone in place?

“I think there’s absolutely no question that you have to have the operator on board from the outset,” said Brislin. “It’s strange: four of the last five stadiums we’ve designed over the last couple of years have started without operators. In each of those four cases we’ve seen issues after we’ve started the stadium into operations.

“Why is this the case? In each instance they’ve been national stadiums that have had other drivers behind them. But it’s been fundamental that the absence of the operator was an absence that was felt later on.

“In certain times when the operators have come on board early, they’ve been quite focused on their commercial imperatives – and perhaps the national sporting groups have felt threatened by that approach. So it may be that operators have to be very balanced in how they approach the sporting groups in the stadium,” said Brislin.

“We’ve just come off the back of a £50m redevelopment over two years,” said Kelly. “Ashton Gate is the home of Bristol City Football Club, currently in the Championship, and Bristol Rugby, also in the Championship – with both punching for promotion this season, fingers crossed. We also have a basketball team.

“Phase one was the stadium development, on which we had the full sign-off just before Christmas; and phase two is a multimillion pound development into a 3,500-5,000 mini-arena and a couple of hotels, some residential and some leisure over the next two to three years.

“The first brief from the owner when I joined [four years ago] was, what do we want to achieve? Number one was financial sustainability. Two is local, as in local social engineering. And three was a venue that could grow, and continue to grow,” said Kelly.

“Back then the stadium was basically part of an industrial estate, prior to development. It’s now a buzzing hub, where you’ve got different people and clubs meeting at the stadium. We have a range of stakeholders, all feeding in to the venue.

“Flexibility throughout is key,” said Kelly. “In the context of Ashton Gate, we’re a venue first and foremost. We have a large exhibition in today for example, with 1000 people. Sport is only 40 times a year. It needs to wash its face for the other 300 plus days a year. Our boxes are boardrooms, that we rent out. Stadiums are getting better at doing this, for 365 usage. It’s about pure flexibility.

“We recently had Manchester United in the FA Cup, which was a big thing for Bristol City,” said Kelly. “We could have filled the stadium four times over. Everybody wanted to be part of it. We managed to create destinations within the stadium, thanks to our flexibility. For instance we had a pop-up Michelin-star restaurant — so we financially yielded far more per ticket because that Michelin-star chef was there and we could charge more for a table.

“Regarding the fan engagement area there’s a lot of nostalgia, especially in football, and history and legacy and habit. It is important to be sensitive to that, but it’s important not to be driven by the nostalgia around football.

“One big issue is that we have a missing demographic of football fans, from the ages of about 17 to 28 – the millennials,” he said. “They’re missing. They don’t come to football. Why not? And how do we start getting the next generation on board? “We try to understand what that Instagram generation wants out of the experience. They want to part of something, and they want to tell their friends. They may not care what the event actually is. We saw a great snapshot of that when Man United came to town. We sent photographers out to watch the crowd, rather than the game – phones out everywhere.

“We’re starting to create different experiences now, such as split-level sports bars – so it’s not just pie and a pint, pie and a pint at Bristol City games. Another pop-up we have now is vegan and vegetarian food, to try and go with this generation really.

“It’s difficult to understand. Ten years ago we wouldn’t have been taking about Instagram. You don’t want to lose your atmosphere – but you also have to evolve. In ten years time, the people who buy season tickets may not want to stand and call the away manager a so-and-so! If we’re driven by nostalgia, we won’t change and evolve,” said Kelly.