SVG at 10: A look back at a decade of Sports Video

When Sports Video Group was launched in January 2006, we set out to be an association with a difference. Yes, as with most associations, our members and sponsors help us lay out an agenda for activities and initiatives. But we do boast one major difference: a dedicated (and global) editorial team that spends countless hours every week reporting on the industry’s biggest events and technological advances.

The goal is simple: to use the power of the written word (and video) to tell our members’ and sponsors’ stories in an in-depth way, helping inform sports-video professionals around the globe.

That approach has allowed us to spend much of the past 10 years reporting firsthand from inside the world’s largest sports events. We have witnessed the way sports TV production has evolved and, in many ways, led the industry in deployment of new technologies. Some of those new technologies create a template for future operations; others fall by the wayside. But, regardless of whether a technology finds a place in the marketplace, those early efforts of putting it to use involved tons of effort, a lot of faith, and plenty of patience.

The dynamism of sports

It goes without saying that the sports segment of the TV production industry is the most dynamic. In the past five years, TV-viewing habits have undergone a profound shift, with streaming services like Netflix, Amazon, and Hulu competing with the TV networks for eyeballs. But the traditional broadcast and cable networks hold the ultimate weapon in appointment television: live sports.

Yes, part of that is because the value of sports rights and franchises continues to rise. But the real reason the industry is so dynamic is that visionary production professionals are always looking to improve the quality of the TV-viewing experience and manufacturers and production-services vendors look to stay one step ahead of the competition. That constant push-pull — coupled with the support of networks, teams, and leagues that make the necessary financial investment to distinguish the on-air (or in-venue) production from the competition — is the magic formula for the industry.

Just look back to 2006 and see where our industry was in terms of innovation. The 2006 World Cup made the move to all-HD production, a step that had repercussions around the globe because many European broadcasters were not yet sold on the benefits of HD. Hi-def was still in its formative stages domestically, despite the fact that there were 50 HD production units on the road (today, there are more than 230).

Tennis’s Hawk-Eye instant-replay system debuted and seemed to be about as far as technology could go in overturning an official’s ruling. The massive scoreboards and top-notch video- and audio-production facilities that have become the norm in venues were not even a dream; justifying expenditures on HD cameras, EVS replay servers, and fully broadcast-capable production switchers seemed impossible. And the college-video marketplace did not extend beyond team video coordinators, who used the power of video- and audio-content creation to improve on-the-field performance but, otherwise, were seen as nothing more than an extension of the coaching staff.

The global transition to HD

Today, it’s hard to recall a time when HD was not the norm. That’s why the 2006 World Cup was so important: it was the first global sports event to commit to all-HD production. That decision was important not just to U.S. domestic-rights holder ESPN, which already had an HD service, but to broadcasters around the globe that were looking for a reason to flip the HD switch. The World Cup provided that reason.

The HD efforts for the World Cup were also important for another reason: the use of two fiber rings from T-Systems allowed transport of uncompressed HD feeds as well as unilateral SD feeds. 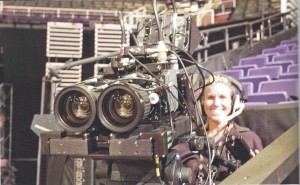 Less than six months after the global success of the World Cup, there was another major accomplishment in sports production: the 2007 NBA All-Star Game in 3D.Tech geeks who attended the NBA All-Star Game will never forget the experience, for which NBA Entertainment and the league went all out in 3D. Working with PACE’s Vince Pace (who played a key role in the 3D Avatar experience that captivated moviegoers in 2009), the league’s production team deployed five 1080i stereoscopic 3D rigs to cover the All-Star festivities and delivered content to a viewing party at Las Vegas’s Mandalay Bay hotel, complete with booming sound courtesy of multiple subwoofers placed under the viewing stand.

The efforts kicked off a five-year period of interest in the 3D format for live sports production, highlighted by the launch of ESPN 3D in 2011 and 3D coverage of the US Open tennis tournament in 2010, the MLB All-Star Game in 2010, an NFL Thursday Night Football game, the Masters golf tourney in 2011, the Ryder Cup in 2012, Wimbledon for three years, and ESPN’s X Games. Ultimately, the format fell victim to a combination of limited bandwidth, which hampered the ability to pass the high-quality venue experience through to the home, and the awkwardness of viewers’ having to wear battery-operated glasses. Ultimately, the limited audience made the additional expenditure in technology and manpower unsustainable.

But, as shown by the list of accomplishments, it was definitely not for lack of trying, and the experience truly was extraordinary for those who had a chance to see 3D on a full-bandwidth, full-resolution movie screen. 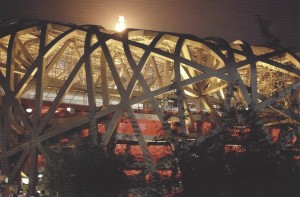 The Olympic Flame, visible over the iconic Bird’s Nest, at the 2008 Beijing Olympics

The Olympic Games also, over the past 10 years, opened the door to new technologies and workflows. Take, for example, the 2008 Beijing Olympics, where there were two big stories. First, it was the first time an Olympics was produced entirely in HD. Making that a reality took some real innovation, particularly when it came to road cycling events and the marathon: wireless HD cameras and RF technology had to rise to a new level to ensure that the coverage went off without a hitch.

It was also the first time that Olympic Broadcast Services (OBS) produced an Olympic News Channel, an important effort provided to rightsholders without the financial or personnel resources to offer in-depth coverage.

The second big story actually took place thousands of miles away from Beijing. NBC Olympics took advantage of a global fibre network to establish 16 HD production circuits between Beijing and New York to allow content, both high- and low-resolution, to be exchanged. A mixture of Omneon storage systems, Avid editing and storage, and Aspera file-transfer technology allowed new efficiencies in production that created the template for what broadcasters around the globe now consider standard operating procedure for events big and small.

Got fibre?
After 2008, a quick succession of production accomplishments transformed the way sports can be covered. At the 2009 World Series, for example, the MLB Network controlled cameras and cut the show not from a remote production truck onsite but from a control room in Secaucus, NJ.

That could be the biggest revolution in sports production of the past 10 years: the use of large-bandwidth pipes to connect a broadcast compound with a broadcast plant, making the former an extension of the latter.

Continuing with the MLB Network story, deployment of the MLB Ballpark Cam system provided a direct connection from the network facility in Secaucus to every ballpark. Not only did the system allow robotic cameras in each stadium to be controlled from the broadcast facility, but it also allowed home and away broadcasts, isolated camera feeds, and even radio calls to be recorded locally at each ballpark and pushed to the MLB Network facility following the game. The results have allowed the network to build a comprehensive archive of every game, not only preserving the history of the game but creating new content-creation and revenue opportunities.

Fast-forward to 2016, when CBS Sports, with the help of The Switch, has taken that capability, which relied on fixed stadiums with fixed fiber installs, and put it on the road for golf coverage. The Switch has built two vehicles that can roll up to a golf course and provide operators in the compound access to video content at home via a two-way circuit. And then, at the end of the day, the two-way connection is turned into a robust one-way pipe to transfer melts and other content to CBS headquarters.

Imagining the future
The one consistent theme in sports production (and in the entire TV-production industry) is to always strive to do more and push the boundaries. And the hard work of the past 10 years has laid the foundation for a future that will include everything from UHD to HDR to VR, acronyms that will be a part of the vocabulary by 2019.

Even the failures, like 3D, played an integral part in getting the industry to where it is today. The potential of 3D drove remote production (and many facilities) to embrace 1.5-Gbps and 3-Gbps signal transport, technologies that are key to producing content in 1080p and even 4K. In an odd way, it is the technological equivalent of making lemonade out of lemons.

So all the developments during the past decade have moved sports production to where it is today, on the cusp of a revolution not only in production but in the consumer experience.

It is where technologies like high dynamic range and 4K resolution will work with higher frame rates to deliver a life-like viewing experience unfathomable 10 years ago.

It is where technologies like smartphones and VR goggles and glasses will work in concert to deliver an immersive viewing experience unimagined three years ago.

It is where sports-production professionals focus on using the best production tools available while keeping an eye on the horizon for tools that take the next step in quality, performance, reliability, and cost saving.

And it is where SVG promises to be, as we continue to tell the story of the technical innovation, human inspiration, and professional dedication that make sports production what it is today, tomorrow, and always.