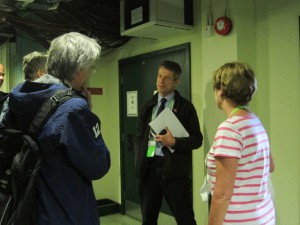 SVG Europe, with the co-operation of the All England Lawn Tennis Club (AELTC) gave two broadcast professors and a career outplacement professional from Ravensbourne an opportunity to spend a day at Wimbledon learning how the event is produced for not only the British public but viewers around the world.

Highlights of the tour included an overview of the BBC broadcast facilities courtesy of Alan Wright, SIS, engineering manager; a look at the world feed operations with IMG Media’s Dave Shield, SVP Global Director of Engineering & Technology; and an inside look at the 3D production with the help of Duncan Humphries, CAN Communicate partner.

The tour marked the second time SVG Europe and Ravensbourne have collaborated on bringing representatives from the school to a major sporting event. The previous effort was for an NBA basketball game at the O2 Arena next door to the Ravensbourne campus. 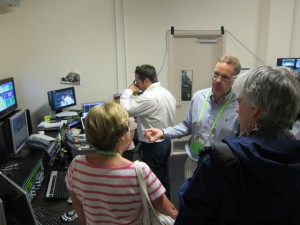 The goal of working with professors and also students is to help prevent a crisis in the industry as less and less broadcast and engineering students understand the career possibilities and exciting chance they have to become part of an industry known as much for its familial feel as it is for its commitment to broadcast excellence. Students today are often drawn to non-traditional media

companies and social media platforms and are simply unaware that they can get involved, and begin a career, working for their favorite channel and on the production of their favorite sport.

“Education is a top priority among our advisory council members and it is vital that we help lead by making sure today’s educators have the tools to help students understand the wealth of opportunities available to them in the sport production industry,” says Joe

Hosken, SVG Europe, general manager. “The broadcast technology eco-system is changing so quickly that everyone in the industry needs to make sure that students and professors have a chance to keep up with the changing workflows, professional requirements, and demands. The tours we help bring together, and our relationship with Ravensbourne, do all of those things.”

SVG Europe is looking for similar opportunities in the future and if your company would like to get involved in helping in the educational efforts please contact Joe Hosken at joe@sportsvideo.org or Ken Kerschbaumer at kenkersch@sportsvideo.org.