The Dyvi control panel is a key part of the difference between it and traditional switchers. “We are using a new concept of panels,” said Fernando Lopez Cisneros, Business Developer, EVS, at a recent demonstration day for broadcasters organised by Gearhouse Broadcast. The new panels will be available in different lengths, but don’t need more depth. “If you see an operator preparing a show, he uses the full 4M/E panel, which is [about] 1,300 push buttons for the Kayenne, and when they go on air, they only use about 20% of that. They map everything in an area on the panel and they cut it from there,” he explained.

“We do the panel totally assignable. You can put anything anywhere you like, so the operator goes there and builds his show — and will have only the functions on the panel that he needs.”

“Dyvi works with a very powerful NVidia GPU, and the next generation version is already at the door,” and due next year, which should deliver twice the speed, allowing the initial systems to be easily upgraded. As the GPU can process the picture pixel by pixel, frame by frame, Lopez Cisneros believes it offers considerable advantages over the FPGAs used in traditional switchers.

“It means that if you do several transformations that you would normally think of as being DVEs, there is no delay between the processed and the unprocessed video,” said freelance vision mixer Jez Nicholson at the recent demonstation day.

A system with two rack units, as bought by Gearhouse, “has the capability of 4M/E switchers,” claimed Lopez Cisneros, because the dedicated hardware used by traditional vision mixers has been replaced by GPUs. Add that to its use of IP and the extremely flexible panel design and he maintains that “this is a revolution in the broadcasting business” and the first real change in switchers in 20 or 25 years.

However, users should be able to adapt to it fairly easily. “As far as the operator is concerned, any sources that are plugged in to remote boxes just appear as normal sources for the operator in our production set up menu,” with up to 24 from the local processor and a further 24 from the remote source, all of which can be treated exactly the same and mapped on to the panel, explained Nicholson, who demonstrated the system for Gearhouse.

“From an operational point of view, it doesn’t matter if the sources are next door on the studio floor, or thousands of miles away,” he said.

“Rather than having a fixed M/E structure, with a fixed number of keyers per M/E, we build layers,” which can be added to continuously until you’ve created the effect you want. As an example, Nicholson showed an effect with 23 layers (using a background layer and the numbers 1 to 22), where each moved independently. “That’s like doing 22 DVE moves at the same time,” using just a small portion of the panel, and the transition module. “You’d have to have a very large conventional switcher in order to have 22 keys available to you.” That was just one of the things the switcher was doing, and there was still plenty of processing power left. 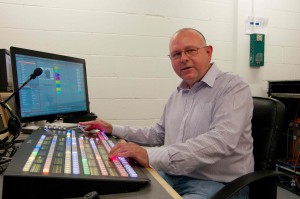 On the panel: Jez Nicholson has found Dyvi to be very flexible and easily configurable

It is also possible to “embed scenes within scenes”, so that a standard box over the shoulder can also be a scene in its own right, with further scenes inside that – “it frees you up from having to switch M/E banks around and running out of keyers.” As you work on one of the scenes, the panel will re-map itself dynamically to show you the set up of that particular scene, with everything directly accessible, “so we’re not having to work on a huge surface.” On the separate graphical user interface, users can build up timelines (any number of which in a scene can be running at the same time), and each timeline can contain multiple tracks, for manipulations on multiple objects, with each on its own track. “That helps you keep track of what’s going on,” said Nicholson. “You can also slip the tracks across each other, to create offsets, etc. That again is quite a powerful programming tool.”

There are also macros, including conditional macros that include logic gates. So, if you’re on camera one (or come to a certain timecode on a remote RAM recorder), it carries out one set of commands, but if you’re on camera two (or a specific layer is switched on in a particular effect), it does something else.

In one example Nicholson showed, the conclusion of an animation automatically cut to whatever source material was in the box, before removing the layers that were on it, to produce a seamless cut, reducing a large amount of work for the operator. “The macros are very powerful indeed,” he said. Multiple macros can be triggered at once (with a mix of one-off and conditional macros), unlike a conventional switcher, where they will trigger in sequence.

In another demonstration, he showed how the system can deal with 3D objects, interpolating how the objects intersect in real time as they are moved around. “You don’t have to worry about having to set priorities between layers.” Once the parameters of an animation or transition have been set up, it can be handled in the background, and is no different in operational terms from doing a mix. “It simplifies the whole process greatly.”

Everything on the panel is fully mappable, and any scenes can be assigned as crosspoints. “If you have a dozen scenes, that’s like having a dozen M/Es available to you immediately, and the system will render the effect as soon as you cut it to a preview monitor or to programme, so you can have all of your scenes available to you at the same time.” Whereas if you had three M/E banks, you’d only have three effects available at once without having to recall anything.

“Each processing unit has eight channels of RAM recorder [with 20GB of useable video on each module], and where you have units linked together, it just doubles everything,” so the demo had 16 channels, which could be used as delay lines, loop recorders, or ganged together to create key and fill, and a macro can recall any file into the RAM recorder to perform an effect. Each processing unit can have 24 inputs with six outputs, or 16 in/12 out.

There are two multiviewer outputs per unit, fully configurable (including VU meters). Any windows taking up less than a quarter of the screen are low resolution — if bigger they are high res.