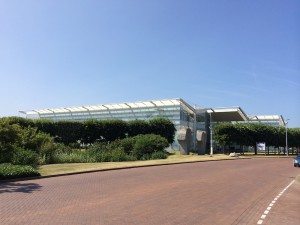 With a busy programme of annual events including FutureSport and Sport Production Summit, SVG Europe has rapidly become Europe’s leading producer of sports broadcast technology summits. Now it announces plans for a new-format Sport Facility Tour and Conference event to be coproduced by IMG – the largest independent producer of sports programming in the world.

Responsible for more than 21,000 hours of television and over 30,000 hours of radio annually, the IMG production team consistently works on coverage of cornerstone sports tournaments – from the English Premier League to the European Tour to Wimbledon.

There could hardly be a more appropriate location, then, for the inaugural SVG Europe Sport Facility Tour and Conference. Coproduced by IMG and taking place on the afternoon of 10 October, the event will combine an extensive guided tour of the IMG facility with a series of presentations and panel sessions examining topics including Premier League workflows, Stockley Park production workflows, and the rise of ‘Superfeeds’ and the rapidly changing world of remote production.

Joe Hosken, general manager of SVG Europe, comments: “As a natural extension to our existing and highly popular one-day summits, it seemed only logical to start developing events to take place in the very heart of sports broadcast facilities themselves. It’s an idea that has really taken flight through the collaboration with IMG, and we are delighted that our first Sport Facility Tour and Conference will take place at their remarkable Stockley Park facility in October.”

David Shield, SVP global director of engineering & technology at IMG Media, adds: “IMG Studios welcome the opportunity to host the first Sport Facility and Conference and we look forward to explaining how the facility has been built to cater for sport production workflows especially in relation to the production and international distribution of the Barclays Premier League.”

Full details on individual sessions and speakers, along with registration details, will be released in the coming weeks.