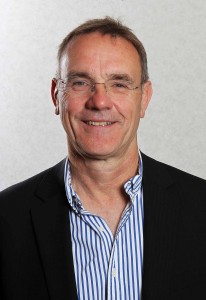 At SVG Europe’s Sport Production Summit in Amsterdam, long-serving chairman Peter Angell announced that he is to step down with immediate effect – with David Shield, Senior Vice President, Global Director of Engineering & Technology at IMG confirmed as his successor.

After studying electronic engineering at City University and computer science at the Open University, David Shield joined the BBC as a technical operator in 1979. Leaving the BBC in 1990 as a sound supervisor with a wide range of experience of different genres in both studios and outside broadcasts he joined Champion TV, formed to provide the UK’s first satellite sports channel on BSB, as Head of Sound.

After the merger of BSB and Sky in 1991 Champion TV was re-configured as a post production facility for TWI, later to transition to IMG. Promoted to Senior Vice President in 1999, David has overseen the continued expansion of IMG’s facilities including its recent move to IMG Studios in Stockley Park, in 2013.

David was part of the team to stage the Commonwealth Games in Melbourne in 2006 and was Head of Production Facilities for the Asian Games in Doha in 2006. He has recently managed production facilities for the Asian Winter Games in Kazakhstan and the 2011 Rugby World Cup in New Zealand. He was also technical producer for Channel 4’s coverage of the Paralympic Games in 2012.

IMG Studios currently provides studios for the Premier League’s overseas content service, Premier League Productions, as well as Al Araby, a new Middle East news channel. As well as a busy MCR, it provides post-production facilities to a wide range of IMG and third party clients, and was also the location of the International Broadcast Centre for the 2015 Rugby World Cup.

“Peter Angell has been a vital figure in developing SVG’s presence in Europe since the very beginning, and we are extremely grateful for all his hard work over the years,” says SVG Europe general manager Joe Hosken. “As an equally well-respected figure throughout the broadcast community, David Shield is a superb successor, and we look forward to working with him closely as SVG Europe prepares for its next phase of development.”