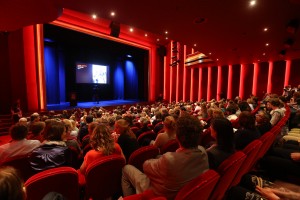 The 2017 Sports Production Achievement Awards will be held at Amsterdam’s prestigious DeLaMar Theatre on 14 September.

This marks the first occasion on which the Sports Production Achievement Awards will be held as part of the Sports Production Summit, which this year is taking place at the DeLaMar Theatre in Amsterdam, ahead of IBC 2017. In contrast to previous years, the Awards will now feature video material of shortlisted entries and will therefore have more of the feel of an event in its own right. Subsequently, there will be a post-Awards Networking Party at the RAI on Saturday evening. Both the Awards and Networking Party will be sponsored by Canon.

“Expanding the awards is in keeping with SVG Europe’s mission to recognise the contributions of those in our industry who make sports content such an important part of sports fan’s daily lives,” says Peter Angell, SVG Europe, Sports Production Awards, Chairman.

A fourth category, Outstanding Contributon to the European Sports Production Community, will be nominated and determined by a committee drawn from the SVG Europe Board membership. In the three other categories, a shortlist will be drawn up from the nominations submitted by the readership and then voted on by individual category committees populated by SVG Europe Board members to arrive at the final results.

Nominations will begin to be accepted on June 1 and eligible technologies and events should have taken place between 1 August, 2016 and 24 July, 2017. Nominations can be made here from this Thursday: https://www.svgeurope.org/sport-production-awards/   and any enquiries should be directed to SVG Europe Editor David Davies: [email protected].

Descriptions for the four categories are as follows:

OUTSTANDING LIVE EVENT ACHIEVEMENT: The Outstanding Live Event achievement award is presented to the production team behind the best live event coverage of a sports event that occurred between August 1, 2016 and July 24, 2017. This award is designed to honour complete event coverage, technical innovation, direction, production values, and quality of storytelling. PLEASE NOTE: Nominees will be required to submit a six-minute video of a portion of the production (unedited) that the nominee believes best encapsulates the live event achievement.

OUTSTANDING TECHNICAL ACHIEVEMENT: The Outstanding Technical Achievement award is presented to a specific technical achievement within a larger production. Some examples include a new use of augmented reality, a new camera system, a new approach to live event audio. The award is not for the technology itself but rather its use within an event in a positive and meaningful way.

OUTSTANDING DIGITAL ACHIEVEMENT: The Outstanding Digital Achievement award is presented to the best production or innovation that was distributed via digital distribution methods that include OTT, an app, VR, and social media platforms. Nominees will be evaluated on the level of innovation and quality of production.

OUTSTANDING CONTRIBUTION TO THE EUROPEAN SPORTS PRODUCTION COMMUNITY (not open to general nominations): The SVG Europe award is presented to an individual who has changed the nature of sports content creation and distribution within Europe. Criteria includes their longevity within the industry, the impact their professional career has had on the entire sports production community, and their commitment to moving the industry forward in a positive way.