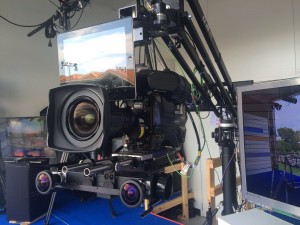 Fletcher-supplied Ncam on location at the 2016 Australian Open

SVG Europe is delighted to announce a new sponsor in the form of Fletcher. Based in Chicago and London, Fletcher is a specialist rental company, offering a range of ultra-motion and super-motion camera solutions, as well as Ncam Live and other specialist cameras.

The company has a long track-record of supplying equipment used to capture major sports events. For example, Fletcher London recently supplied an Ncam Live real-time camera tracking system at the Australian Open Tennis for Eurosport’s unilateral presentation studio that was built for the tournament in Melbourne Park, beside the Yarra River in Victoria.

Although play at the first of this year’s four Tennis Grand Slam’ tournaments only started on Monday 19 January, Eurosport and Fletcher’s Ncam Live were there the week before for rehearsals and pre-recorded studio shows. The Ncam Live was on air daily through till the climax of the tournament on 31 January.

Fletcher has also recently supplied ultra-motion and specialist cameras to a range of motorsport testing events, boxing, and the Superbowl in California. Looking forward, 2016 will be a very busy year with Indianapolis 500, Copa America and a number of summer events.

In other significant developments for the company, Andy Hayford has joined in the newly-created role of International Business Development. Andy Hayford has over 30 years’ experience in the broadcast industry, with much of that time spent in the live sports and rental areas, including major global sporting events.

For the last 10 or so years, Hayford has been a key player in the world of ultra-motion at nac Image Technology and ARRI Media, first with Tornado and then successive generations of nac’s Hi-Motion.

Commenting on his role and the decision for Fletcher to join SVG Europe, Hayford remarks: “I am excited to bring my experience alongside the excellent Fletcher Team in London and Chicago, and look forward to getting us involved with the team at SVG Europe and their diverse range of events and conferences.”