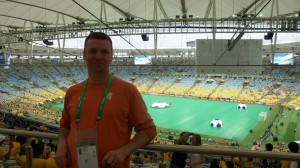 The design, specification and installation of sports venues are often examined and discussed as individual disciplines. But what doesn’t tend to be considered so frequently is the way in which the people who carry out these tasks interact – and the impact (both positive and negative) they can have on each other.

Attempting to encourage a more seamless dialogue between these various stakeholders is one of the major objectives of SVG Europe’s Sport Facility Integration Summit 2015, which will take place in Room E102 of the Amsterdam RAI on 12 February.

“The real purpose of this summit is for all the different groups of people involved in a stadium to have a better understanding of what each other does,” says Hemming, who is the founder of RH Consulting and has worked on landmark projects including the 2012 Olympic Games. “Because these projects involve so many different people – from conception through design, installation and operation – many never get a chance to meet and to properly communicate the issues and problems they encounter which may have been caused unwittingly by people at earlier stages in the project.

“What does everyone do in a venue integration project? What steps can be taken to make the process smoother? And what happens when the broadcaster turns up with its OB truck… do they have a clear appreciation of what went on to make the venue broadcast-ready? This summit will provide some valuable answers.”

Many of these strands will be brought together in a keynote presentation to be given by Dimitri Huygen, entitled ‘The Future of the Sports Venue’. Having helped turn the Belgian Sports Technology Club into the leading Belgian authority on an international sports level, Huygen has spent the last four years heading the European Stadium and Safety Management Association (ESSMA). Since December 2013, he has been involved in the Belgian FA in running the EURO2020 project and stadium development in Belgium.

Joe Hosken, general manager of SVG Europe, comments: “We are delighted to be returning to ISE for the second edition of the Sport Facility Integration Summit. ISE is the world’s best-attended AV and systems integration event, and hosting this summit within the exhibition gives SVG Europe a unique opportunity to bring together the overlapping technologies and communities of broadcast and systems integration through a common business interest in operating in sports facility venues.”

Full information on the event, and details of how to register, will be available on SVG Europe tomorrow.