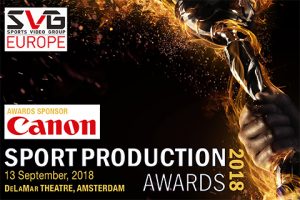 In excess of 30 entries were received for this year’s Awards, which incorporated a further evolution of the category mix to more accurately reflect the current spectrum of technical achievement. “As the success of SVG Europe’s Award grows, this year we have added three new Awards in Technical Achievement – for Audio, Graphics and Imaging,” explains SVG Europe Executive Editor Fergal Ringrose.

These categories augment the existing Outstanding Live Achievement and Outstanding Digital Achievement. And after a ballot of the Advisory Board Members, SVG Europe is delighted to announce that the 2018 winners are as follows:

Reflecting on what has been a milestone year for the development of the Sport Production Awards, Ringrose says: “Across the board we are delighted with the range and number of Awards submissions for 2018, and we sincerely congratulate this year’s winners.”

In addition, as previously announced by SVG Europe, CTV OB chairman Barry Johnstone is to receive the Outstanding Contribution to European Sports Broadcasting Award. A much-admired figure throughout the broadcast industry, Johnstone has been a stalwart of sports and music production since the 1980s.

“Barry’s leadership and influence in the industry extends well beyond CTV OB as his business acumen and commitment to innovation and, more importantly, his commitment to his team has made him an example for all to follow,” says Ken Kerschbaumer, SVG, Co-Executive Director. “His award from SVG Europe is a fitting tribute to a true industry pioneer and leader.”

For the fourth consecutive year, SVG Europe has the support of Canon as title sponsor of the Sport Production Award. For Canon, the Awards take place in the midst of an historic year marking its 60th anniversary. The company will be celebrating six decades of optical achievement throughout the week of the IBC show, beginning with its support of the Sport Production Awards.

Blazej Klacansky, Channel Development Manager for Broadcast and Cine Lens at Canon Europe, comments: “A big part of Canon’s ambition to support live sports production and broadcast is about recognising excellence in the industry. We’re honoured to be sponsoring the prestigious SVG Europe Awards for the fourth consecutive year.”

To find out more about the Sport Production Awards, and to register, please visit https://www.svgeurope.org/sport-production-summit-2018/production-awards/. But be quick – places are filling up fast and registration closes on 1 September!