SVG Europe played host to the sixth annual Sport Technology Awards at IBC where more than 220 IBC attendees were on hand to honour those involved in four sport productions during the past year. The awards are more celebration than contest, and this year four achievements were celebrated at the event: the 2010 Ryder Cup was honoured for the 2D and 3D efforts; Wimbledon for going 3D; and Formula One for successfully transitioning to HD. 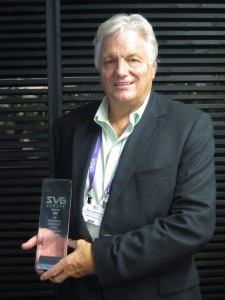 Barry Johnstone with the award for Ryder Cup's 2D production

“2011 has been as fecund a year for sports production in Europe as ever, with activity and innovation spread right across the continent,” says Andy Stout, SVG Europe editorial director. “It’s a cliche in the making perhaps, but from the ski slopes of Scandinavia to the water-sports of the Mediterranean, the broadcasters, federations and service providers involved in covering sports across the continent have spent the past year being busy, active, and pushing the boundaries of what they do.”

The honourees this year were:

The SVG Europe Federation Award: Presented to Formula One Management for contributions to sports broadcasting and transitioning to HD. 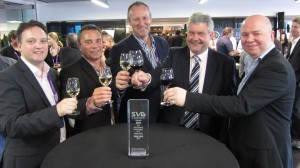 “The next 12 months will once again see European sport broadcasters set the pace for quality sport television as events like Euro 2012 and the London Olympics will dominate headlines and TV ratings across the continent and around the globe,” adds Ken Kerschbaumer, SVG Editorial Director.