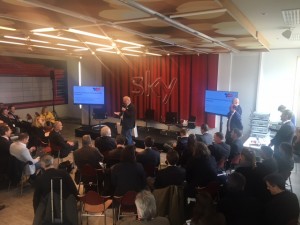 In its most significant showing in Germany to date, SVG Europe is expecting to welcome more than 300 delegates to two events taking place in Munich this week. Following on from the Sky Sport Summit with Sky Deutschland (21 March), SVG Europe will host what promises to be the biggest-ever edition of its Football Production Summit at the Allianz Arena (22 March).

A short taxi ride away, the Football Production Summit will cover the new production, workflow and deliver developments for football production – the major driver for sports broadcast technology innovation throughout Europe. It will feature speakers from UEFA, IMG, Lawo, Canal+, Perform Media Deutschland, Sportscast, NEP and Facebook, among many others. Vizrt is title sponsor of the Football Production Summit 2017.

“The success of these two events highlights the increasing importance of SVG Europe throughout the German-speaking world, and the steps we have taken to reflect the dynamic nature of these markets at our summits,” says SVG Europe European Sponsorship Manager Clare Sturzaker. “We would like to take this opportunity to thank Sky Deutschland and all of our sponsors for their ongoing support and collaboration.”