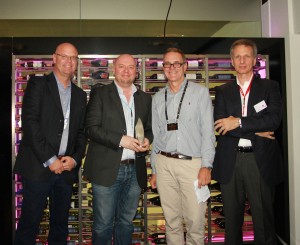 The SVG Europe Sport ProductionAwards attracted more than 200 people to the First Floor Restaurant at the RAI last night. An annual opportunity to celebrate production and technical achievement in the sports broadcast world, the Sport Production Awards was again sponsored by long-time supporter Canon.

The 2016 Sport Production Achievement Award went to European Tour Productions, CTV OB and Sky UK for the Open Championship. Meanwhile, the 2016 Sport Technical Innovation Award was presented to national French channel M6 for use of Augmented Reality in its EURO 2016 coverage.

There was also a further opportunity to mark the ‘changing of the guard’ in terms of the SVG Europe chairmanship following Thursday’s announcement that Peter Angell has stepped down from the role, with IMG’s David Shield announced as his successor. Angell was given a special award to acknowledge his contribution to SVG’s development in Europe over its first half-decade, although he will remain involved as a Board Member of the organisation.

A number of video interviews were recorded during the Awards, and will appear on the SVG Europe website in the coming days.

“In a year of remarkable achievements in the sports production community, we were delighted to have the opportunity to celebrate some of the most exceptional in the company of friends and colleagues from around the world. I’d like to extend particular thanks to Canon for continuing its fantastic support of this event,” says SVG Europe general manager Joe Hosken.