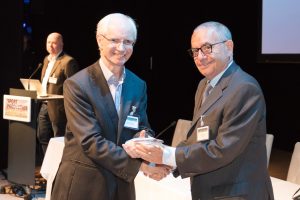 A native of Seville, Spain, Romero began his career in 1965 working in the engineering department for TVE, the Spanish television network. Romero retired at the end of 2012 from his position as managing director of Olympic Broadcasting Services (OBS), the IOC’s host broadcast organisation. He had previously been chief executive of ten different Olympic Games Host Broadcasting organisations, and although formally retired from day-to-day operations Romero continues to contribute to the planning of various Olympics-related events.

Fresh from receiving the Award, Romero spoke to SVG Europe Editor David Davies about some of the highlights of his career, a few of the most important technological changes in recent years, and the current technologies about which he is most excited. Find the clip on SVG Europe’s YouTube channel: https://www.youtube.com/watch?v=yHZoLUuWQZE.