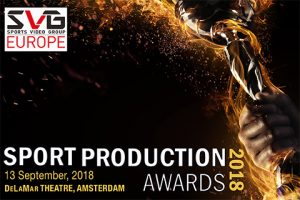 SVG Europe is delighted to announce that it has opened the entry process for the Sport Production Awards 2018, which will take place at the conclusion of the Sport Production Summit at the DeLaMar Theatre, Amsterdam, on 13 September the day before the commencement of the IBC exhibition. Once again, the event will recognise excellence in broadcast production and welcome a further Europe-based inductee to the SVG Hall of Fame.

After a hugely successful 2017 edition in which the Sport Production Awards was incorporated into the Sport Production Summit at IBC for the first time, the new-format Awards will return this year with a further revision to the roster of honours. For the first time, there will be three separate Technical Achievement Awards in recognition of the remarkable advances currently taking place in the fields of Graphics, Imaging and Audio.

For each entry applicants are required to summarise their achievement in 200 words or less; provide a link to a video clip that can be used by the judges to evaluate the achievements; and, if needed, supply links to other relevant materials that support the nomination.  All entries can be made here: https://www.surveymonkey.com/r/YKVFKC5; the closing date is 17 July.

In another landmark year for 4K and HDR production as well as innovations related to AR, VR and immersive audio, expectations are high for another bumper crop of entries.