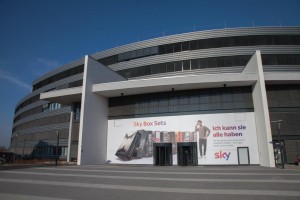 SVG Europe is delighted to announce that it is again partnering with Sky Deutschland for the second edition of its DACH Summit. Following a hugely successful first edition two years ago, the 2017 summit is scheduled for 21 March – the day before SVG Europe’s Football Production Summit takes place in the same city.

As with the previous edition, the DACH Summit will draw together broadcasters, consultants, service providers and other key stakeholders to discuss the present and future of sports broadcasting in Germany, Austria and Switzerland. The event will take place at Sky Germany’s headquarters near Munich and will include a buffet lunch and multiple networking opportunities.

Topics to be covered during the summit’s sequence of panel discussions and presentations include: the emerging landscape of Next Generation Audio and how this will affect the future production of live sports; the potential of VR and AR for greater consumer engagement; the opportunities arising from more sophisticated data management; and the outlook for digital transformation as a whole.

The DACH Summit is open to Platinum sponsors as well as invited stakeholders from Germany, Switzerland and Austria. For enquiries about attendance please contact Sabine Mlynek at Sky Deutschland ([email protected]).