SVG Europe, Ravensbourne go behind the scenes at Lord’s 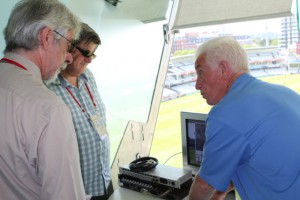 Further underlining both organisations’ desire to advance experience-rich broadcast technology training, the tour marked the second time SVG Europe and Ravensbourne College have joined forces to bring representatives from the school to a major sporting event.

Coordinating the visit was Roger Chambers, who has been Sky Sports production manager for cricket since 1999. Highlights of the tour included: a look inside CTV’s OB4 HD unit, where the core of the production takes place; a detailed analysis of the camera plan, which involves 22 Sony cameras with Canon lenses and six Hawk-Eye cameras; a look inside Lord’s extensive commentary facilities, which include dedicated rooms for Sky, the BBC and Channel 5; a peak inside Sky’s interactive nets area; and a detailed outline of cricket’s demanding audio requirements courtesy of Denis Stevenson.

There were also plenty of opportunities for taking photos of the always spectacular Lord’s ground, which was handily bathed in sunshine for the duration. 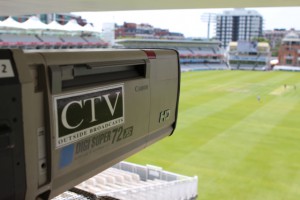 CTV is provider of the OB4 HD unit, where the core of the Ashes production is taking place

Along with recent visits to Wimbledon and an NBA basketball game at the O2 Arena, the Lord’s trip continues SVG Europe’s policy of forging closer links between broadcast service providers and educational specialists as both parties seek to forestall a potential skills crisis in the sports broadcast industry. Further visits along similar lines are in the pipeline, with details to be announced soon.

Reflecting on the day, SVG Europe general manager (and, it should be added, ardent cricket fan) Joe Hosken remarks: “As a sport cricket has provided the vehicle for numerous technological camera and graphics innovations. Sky Television has been pioneering in its investment and associated partnerships to deliver a richer experience for the viewer. To see behind the scene of the ‘travelling circus’ was invaluable as SVG Europe continues to develop and formalise its relationship with educational institutions. On behalf of the entire team, I would like to extent a particular thank you to Roger Chambers for his time and for making this visit happen.”