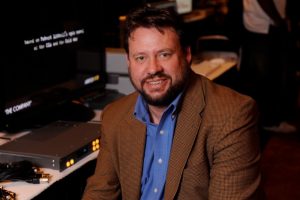 Our Sit Down with Bryce Button, director of product marketing, started with a look back at Las Vegas…

At NAB 2018, you introduced a raft of new products. What were the highlights as far as visitors were concerned?

HDR was the name of the game, and visitors stopped by our stand to check out the FS-HDR converter/frame synchroniser with powerful new v2.5 firmware, as well as our tech preview of the AJA HDR Image Analyzer, which you can expect to see come to market later this year. Broadcasters and AV professionals transitioning to IP showed interest in our new IPR-10G-HDMI Mini-Converter offering SMPTE ST 2110 IP video/audio to HDMI, as well as the KONA IP, Io IP and Avid DNxIP I/O devices with new uncompressed SMPTE 2022-6/7 10GigE support – SMPTE ST 2110 to come later this summer.

We also unveiled significant firmware updates for our Ki Pro Ultra Plus and Ki Pro Ultra recorders/players that introduced DNxHR support, and an update for the HELO H.264 recording/streaming device.

What can we expect from you at IBC this year?

As IBC 2018 draws near, we’re preparing to reveal new products that build on our proven tools for broadcast, production, post, streaming and AV professionals. Visitors to the stand will be able to see a combination of forthcoming and available 12G-SDI, fibre and Thunderbolt 3 solutions that streamline high resolution, high dynamic range (HDR) and high frame rate (HFR) workflows, as well as IP tools that simplify the transition to IP. AJA will also demo its latest conversion, editing, colour correction, monitoring, playback and analysis tools for HDR pipelines. Popular solutions for eSports production will also be on display, including the KONA HDMI, Io 4K Plus, Ki Pro Ultra Plus, FS4 and HELO.

Where do you think we will be regarding HDR by the end of the year?

HDR is quickly gathering steam, and professionals across the broadcast, film and ProAV industries are looking at how they can embrace it. New developments are continually emerging that point toward a strong future for HDR. The BBC successfully ran a workflow allowing an HDR master process with new HLG transformations for SDR delivery for the Royal Wedding, which was seen around the world on traditional TV sets. FS-HDR and its Colorfront Engine parameter controls have been utilised in a range of sports workflows from the World Cup to Wimbledon, even driving scoreboards in MLB (Major League Baseball) venues. FS-HDR’s simultaneous HDR and SDR live outputs, enabled by new v2.5 firmware, have furthered the device’s single-master HDR workflow. Its ability to convert SDR signals and graphics to HDR in real-time, with one truck, one camera shader and crew, can reduce costs by using one switcher and one production format, while providing the flexibility to distribute in HDR and SDR without disturbing picture quality.

There are currently a number of ways to approach HDR from PQ – HDR10, HDR10+, Dolby Vision – to HLG and more, and AJA provides solutions that support these formats.

What has been the impact of IP in broadcast for your business?

IP has opened up new opportunities for AJA’s business, from our involvement with IP standards bodies to our product development map. As a founding member of AIMS alliance and participating member of Aspen Community and Sony’s IP Live Alliance, we’ve become deeply involved in the development and promotion of IP standards. A number of broadcasters are taking a hybrid approach in the transition to IP, using a combination of SDI and IP technology. Our history in developing conversion products has positioned us well to serve the community with a range of solutions that support hybrid workflows, enabling conversion between SMPTE ST 2110 and HDMI, and JPEG 2000 IP audio and video and HDMI and SDI. We’ve also released IP versions of our desktop and mobile I/O devices – KONA IP and Io IP – with ST 2022 and ST 2110 support, to bring simplified, compatible capture/playback to IP pipelines.

Has the increase in OTT applications impacted your product development? 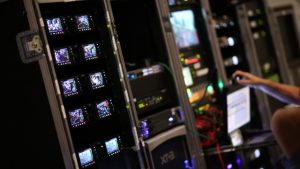 Yes. With the continued rise of OTT, there’s a growing demand for products that make streaming simple and offer flexibility for varying production and live environments. At the most basic level, AJA offers the U-TAP product line which enables capture and streaming from SDI or HDMI across USB 3 with no drivers to install, as they are supported at the OS level. These products behave effectively like extremely high-quality webcams and allow the user to connect affordable consumer HD cameras or the most professional SDI cameras for their OTT needs. On the desktop front, the Io 4K Plus offers a Thunderbolt 3-based portable solution for both 12G-SDI and HDMI 2.0 capture, playout and streaming. The four SDI ports are bi-directional, so you can use software like Wirecast and software switch from four separate cameras or presentation sources live to your CDN.

For the best of all worlds in terms of OTT, HELO, our standalone H.264 encoding, recording and streaming device enables you to take a 3G-SDI or HDMI source and both redundantly record to NAS, USB or SD cards as well as simultaneously stream to your CDN, YouTube, FB Live and many more outlets with flexible bandwidth settings, which can be separately set for each scenario. The range of uses we are seeing HELO being deployed in is staggering; from broadcast to OTT, sports, eSports, and live concert environments to medical training, online gambling, corporate video conferencing and much more.

Tell us about the RovoCam – in particular, how it is used for sports broadcasting…

RovoCam is a lightweight compact block camera with an integrated HDBaseT interface that delivers incredible UltraHD or HD video, audio, and control over a single CAT5/6 cable. The camera is ideal for sports productions as it can be easily mounted in and around stadiums and arenas and its audio and video received up to 100m away over affordable category cable. Using AJA’s free RovoControl software, professionals can easily set up the camera for remote control and employ electronic PTZ to move a 1080p box around an Ultra HD frame for Region of Interest pan, tilt and zoom. Up to eight RovoCams can be ganged together, presets shared and controlled remotely.

RovoCam’s application in sports production varies depending upon the specific needs of the stadium or arena. Texas A&M Athletics video production arm 12th Man Productions, for instance, is using five of the cameras in Reed Arena to capture in-stadium footage of athletes and fans, which is displayed on a 54’ x 24’ video board and streamed live to a sports network app. The NHL has also used RovoCams in its playoff arenas to produce video replays for judging challenging calls on the ice.

Do you have a recent sports-related case study you can share?

Step into the Caesars Event Space in Las Vegas and it has all of the conventional trappings of a major sports production. Cameras and a host of broadcast equipment surround an elaborate set dressed with stadium-style bleacher seating, a commentator desk and interview stage, in addition to 75 gaming stations in the round and a decagon of overhead displays. A total of 75 pro gamers gather in the space each week for an “H1Z1” Pro League eSports competition, which pits teams of gamers against one another as they play Daybreak Games’ battle royale hit “H1Z1.” The event draws up to 800 spectators to the venue, but its reach extends far beyond Twin Galaxies’ doors via a Facebook Live stream. Boutique equipment rental and services shop GQC, owned and operated by DP Steve Garrett, oversees each live stream, providing technical supervision, crew and gear, including AJA Ki Pro Ultra Plus 4K/UltraHD/2K/HD recorders/players.

GQC’s workflow includes eight Panasonic cameras, which capture footage of the host, commentators and players; five of the cameras are handheld, one is a front of house camera on a platform, two are mounted on jibs, including one Jimmy Jib. Ki Pro Ultra recorders/players connected to each Panasonic camera are tapped for ISO records and used as primary and backup line records. A media server separately records live gameplay from each of the 75 gaming computers in real-time, while 76 genlocked POV cameras mounted above each computer monitor capture player reactions. A multi-channel AJA FS4 synchronises three additional computers as graphics sources. Each week, the Ki Pro Ultras each record more than three and a half hours of ProRes 422 footage to bullet-proof AJA Pak Media SSDs. The Paks are passed off to the client’s in-house editorial team, who then cut the videos for a rebroadcast, marketing materials and team use.

As the Director and TD determine which content goes live, it’s run through a 192×192 router as a 1920x1080p 3G-SDI signal and sent through a switcher. Footage is then composited with graphics from a dual-channel graphics system and output in real-time to Facebook Live at 1080p.

All in all, the approach to a Facebook Live stream is no different from a broadcast to a major sports network.