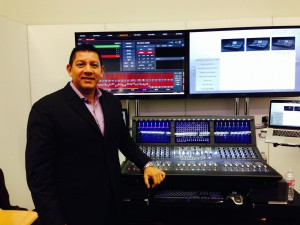 Earlier this year Avid returned to the NASDAQ stock market, a move that effectively underlined the technology company’s return to full-strength after several years characterised by uncertainty and industry speculation. At this year’s NAB Show, the company announced the latest developments in its Avid Everywhere vision – the ongoing media content production project that has contributed significantly to Avid’s resurgence.

Ahead of this important latest chapter, SVG Europe spoke to Tim Carroll, vice-president of worldwide audio at Avid, for his take on Avid Everywhere and the latest developments pertaining to stalwart music production software Pro Tools. Then at NAB itself, Avid chairman, president and CEO Louis Hernandez Jr provided some additional thoughts.

To what extent do you think that Avid has now realised the ambitious vision attendant to the Avid Everywhere project?

CARROLL: We’ve made great headway in achieving what we set out to deliver when we unveiled Avid Everywhere. We stated that it would deliver the most fluid, end-to-end distributed media production environment in the industry, a comprehensive ecosystem that encompasses every aspect of the new digital media value chain, and at NAB 2014 we delivered on this promise.

Not only did over 1,100 broadcast, pro video, and pro audio leaders, technology and creative professionals, and industry influencers from 43 countries attend Avid Connect, the inaugural event of the Avid Customer Association, but it was here that we unveiled the first phrase of Avid Everywhere. We unveiled the Avid MediaCentral Platform and a set of modular application suites that together represent the most open, integrated and flexible media production and distribution environment in the industry.

The ambitions of Avid Everywhere are being realised through the tremendously innovative ways our customers are using the MediaCentral Platform, and there’s lots more to come this year to move us even farther down the road to realising the vision of Avid Everywhere.

Over the past year we’ve seen them deliver some ambitious projects. For example, the creative teams behind Foo Fighters Sonic Highways, the HBO documentary series commemorating the band’s 20th anniversary, established a collaborative audio and video post-production environment with the Avid Artist Suite’s Avid Media Composer | Software and Pro Tools. Pro Tools helped the sound teams cope with increasingly tight timescales and give each episode a different style. They went from having a week and a half to turn around the first episodes to just three or four days by the end. Pro Tools’ robustness was critical in enabling them to achieve this.

In what ways is Avid helping sports broadcast professionals as content production evolves?

HERNANDEZ JR: Lower-cost tools are making it easier to get content and viewership, and with content becoming more available to more channels metadata tagging is evermore important. The result is that [we are spending a lot of time developing] collaborative tools, along with security [mechanisms to protect content].

How will the acquisition of Orad help you cater to sports broadcasters?

HERNANDEZ JR: We want to do things in sports that people haven’t already done. We want to look at second screen, links to the content creation side, ‘gamifying the games’ and so forth. The addition of Orad ­– which has a great team and whose development we have been tracking for a long time – will help us to develop these areas.

One of the big advantages of Avid is that we have a [network of partnerships] with big media companies. Plenty of young companies have new ideas, but we have 10,000 of the largest media companies [in our network] and so we come to the discussion with a lot more credibility and working tools. Also, we don’t build anything unless the customer says this is what we want to do and we want to use it in this way. [In terms of sports] monetisation is normally tied to engagement with customers to increase advertising yield in the venue. Obviously what we are now witnessing [with OTT and second screen etc] is that the complexity of monetisation has increased dramatically. Part of our role is help the industry to sustain what they are doing and make the most of these new opportunities.

What characteristics do you think distinguish the Avid pro-audio user? 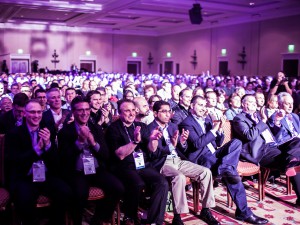 An expectant audience waits to hear about the new innovations at the Avid Connect event, held in Las Vegas before NAB 2015

CARROLL: Like the pro audio community in general, Avid pro audio users face a number of challenges, including increasing complexity of sessions and number of deliverables, with expectations of faster project turnaround – all with lower budgets and fewer resources. With Avid Artist Suite audio solutions, they have the professional tools they need to facilitate creativity and the unbridled power to create without bounds. And with the MediaCentral Platform, they have a single, integrated platform that meets the growing demands of the most complex productions, and gives them the ability to take on a variety of work. They can connect with audio and video professionals in distributed and complex workflow environments, and manage a variety of formats and deliverables with ease.

In what ways do you think the core market’s requirements of Pro Tools will change in the next few years?

CARROLL: We’re already addressing some of the changing requirements Pro Tools users are asking for, such as the ability to create high-quality inspiring content when they want, where they want. At NAMM 2015 we introduced some significant developments to the industry-standard audio production software to enable the next generation of audio professionals to learn their craft on the industry’s most-used audio production solution, before progressing to a full version of Pro Tools. With the introduction of Pro Tools | First, we’re opening music production to everyone. Simple enough for beginners to learn, yet sophisticated enough for the experienced musician, Pro Tools | First enables everyone to experience the industry’s most trusted digital audio workstation so they can turn their musical ideas into fully realised, professional productions that stand out from the crowd – at no cost.

We also announced Pro Tools 12, giving professionals more choice over how they purchase and deploy their tools, collaborate with others, and get more exposure for their work. Customers can now subscribe for as little as $29.99 per month, or buy Pro Tools software outright. With these new options, users can stay current with future software updates and innovations as soon as they are released via the cloud, at no additional charge.

We also launched Avid Cloud Collaboration, a ground-breaking set of collaboration capabilities that enable artists to compose, record, edit and mix sessions working with other Pro Tools users in the cloud, as if they’re all together in the same studio.

And finally, we introduced new services in the Avid Marketplace that allow Pro Tools users to engage in a community of artists, acquire new plug-ins and apps as they need them, store their work securely in the cloud, and post their finished assets or Pro Tools session files for others to license in their productions.

In the pro-audio space, which other companies do you admire – and why?

CARROLL: I admire companies that are deploying innovative workflows to enable individuals to collaborate to create inspiring content. For example, Berklee College of Music, the world’s largest independent contemporary music college, has deployed Avid professional audio production solutions to enable real-time, high-definition collaborative workflows between its state-of-the-art 10-studio audio production complex in Boston and its world-class campus in Valencia, Spain. An ultra-high speed internet connection links the two sites, enabling real-time collaboration on a global level – now a standard practice in many professional project workflows. Musicians playing on one campus can be recorded and mixed by students at the other campus. With workflows like this already in place at educational institutions, the creative possibilities are endless.