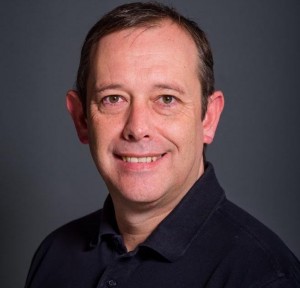 NAB 2017 was a busy time for Blackmagic Design, with raft of new products appearing on the scene. And ever since that event finished, there has been a steady stream of Tweets inviting users to check out the new equipment at other venues.

Needless to say, then, there was a great deal to discuss with Simon Westland, sales and marketing director, Blackmagic Design EMEA – and the conversation began with a substantial claim made at the recent NAB Show…

NAB saw what you described as ‘the biggest release in the history’ of the DaVinci Resolve 14. What makes this special?

Resolve 14, without a doubt, is one of the biggest updates to Resolve since our acquisition of DaVinci back in 2009. Underpinning Resolve 14 is an overhauled video render-engine which radically improves overall performance, and reduces hardware demands.

Our engineers have done a fantastic job – version 14 has better threading and GPU pipelining, lower latency and much faster UI refresh rates, so customers get an incredibly fluid experience and more precise editing. The performance improvement also means that users can now edit projects on a four-year-old MacBook Pro, for example.

Another major update is the integration of Fairlight’s audio engine, which adds a huge set of professional tools for editing, bussing and multi-format audio mastering to formats up to 22.2 Dolby. Fairlight audio can also record up to 96 channels while playing back up to 150 audio channels, as well as mix in real time. The power of Fairlight is just phenomenal, and it brings a whole new dimension to Resolve.

And lastly, we’ve introduced a series of new multi-user collaboration tools into the studio version of Resolve. So not only can you now have multiple editors, colourists and audio engineers occupied on a project simultaneously, they are all working on the same application.

Resolve 14 includes a new compare project timeline feature as well as the ability to pull up and review a complete history of changes. Also, Resolve 14 also features a chat tool allowing users to talk with anyone who might be working on that particular project.

It represents a significant paradigm shift for post-production workflows, which have traditionally been linear. Now, all the different stages of post can work in tandem which, of course, has the benefit of saving facilities time as there’s no need for importing or exporting projects, or waiting for a locked edit before the next stage of the post process, whether that be picture or audio, can begin.

Talk us through the new URSA Mini Pro 4.6K camera. What are the benefits?

The URSA Mini Pro 4.6K is like having three cameras in one: it combines high-end digital film quality with the ergonomics and features that broadcasters and live production teams need. The camera builds on the 4.6K URSA Mini but adds design elements and features, including ND filters, SD card recording and physical controls for shoulder mounted work. That means the camera works well whether you’re shooting a feature film or for broadcast, whether it’s ENG or for live production. 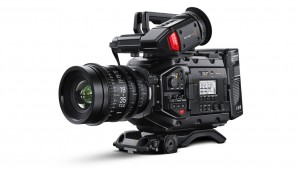 The URSA Mini Pro 4.6K is described as being like having three cameras in one

And because different applications have differing lens requirements, we’ve also incorporated interchangeable lens mounts for the URSA Mini Pro, so that you can switch between photographic EF lenses, PL cinema glass or a B4 mount for broadcast work. Later this year we’ll also be releasing a Nikon mount. At NAB 2017 we also announced a new open protocol for URSA Mini Pro that will allow customers to create their custom remote control solutions using Bluetooth.

The URSA Mini Pro is already being used by high-profile cinematographers and at prestigious live events including Miami’s ULTRA dance music festival.

The UltraStudio HD Mini has been specifically designed for customers performing archiving, edit monitoring and live broadcast graphics tasks, and allows them to use the latest Thunderbolt 3 based computers for fast capture and playback. What is also great is that it’s extremely portable, but powerful enough to allow you to capture and playback 10-bit broadcast quality video anywhere.

Economies are always on the mind of customers. How can Blackmagic Design help them achieve savings?

I think the affordability and flexibility of our products is ultimately what appeals most to customers; our kit is used in broadcast, feature film production as well as across AV and live environments too. You name it, we’ve seen it produced with a Blackmagic workflow. Our goal as a business is to solve customer problems and to do so a cost point that doesn’t price users, big or small, out of the market. So, whether you’re a one-man band or a major broadcaster, everyone has access to the same broadcast quality tools.

We also hear the word future proofing a lot, and again, our kit does give customers options for now as well as in the future. You may not need Ultra HD content now, but the ability to produce it is there, without having to make another significant upgrade, and neither we do charge a premium for those capabilities. Not only that, but we also always champion the use of common, open standards and non-proprietary connectivity. Customers should be able to plug a product into any existing workflow, and they should be interoperable with whatever software or hardware you might have in your video racks.

IP is the current buzz word. Where do you see this going over the next 12 months?

IP is an increasingly talked about requirement. However, it’s not as clear cut as saying, here’s IP, let’s update all our facilities and throw out the old. SDI currently forms the backbone of almost all broadcast, post and studio facilities and the cost of replacing that infrastructure would be enormous. Most pieces of professional equipment in the industry connects via SDI, so we’re not just talking infrastructure, but about the redesign of all those products.

We’ve added optical fibre cages to many of our products over the past year so that customers can buy the SFPs if and when they are ready. But also, we have a huge range of SDI and optical converters that mean these technologies can run alongside one another. The solution will more likely be a mix of both – however, it’ll take time to arrive.

The fact that we saw many well-known manufacturers adding support for single link 12G-SDI is yet another indicator that SDI will be around for some time to come.

Finally, do you have any innovative sports case studies that illustrate the benefits of your system?

It’s always exciting to see the variety of sporting productions that are using our kit. There are OB trucks covering major international events with our cameras, for example, the Tel Aviv Marathon was filmed with a series of URSA Mini 4.6K and produced with a full Blackmagic live production workflow.

Then you have major clubs such as Udinese Calcio in Serie A and Manchester City installing Blackmagic cameras and switchers in their stadiums, to not only deliver match footage to big screens to fans in the stands, but also to stream Women’s Super League football globally on Facebook Live.

As broadcasters, clubs and federations look to produce exciting coverage of their sports using these new channels, it’s great to see that our kit can help deliver high-quality footage for spectators and viewers across the world.