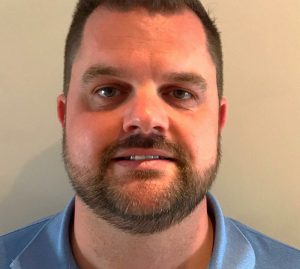 Broadcast RF was set up in 1998 with one aim in mind, to provide the broadcast and related industries with the opportunity to hire specialist microwave and wireless camera equipment. Today, the company is exclusive suppliers to some of the world’s largest television facility companies. With RF being used widely today, there are challenges to be faced – and that proved a good place to start our discussion with Chris Brandrick, the company’s commercial director.

What are the main challenges facing the use of RF equipment in today’s busy spectrum environment?

The main challenge is ensuring we impress upon everybody in the industry that pressure needs to be continually put on governments to secure spectrum for programme making and special events to ensure the current high standards of production are allowed to flourish. We need to stop selling spectrum to the highest bidder and to think about the impact it will have on our major sporting events.

With the ever so more demanding requirements for additional RF cameras at major events, we are under increasing pressure to fit it all into our shrinking spectrum.

The new low latency HEVC encoding equipment could help to allow us to fit more RF cameras in the same spectrum, but with the virtually simultaneous introduction of UHD wireless camera systems and their greater bitrate, this respite may be short lived.

Tell us more about your supplying live onboard camera pictures from competition bikes at the recent Velon Hammer Series road cycling event.

The Broadcast RF VeloVue, is an onboard miniature camera package with a built in RF transmitter, launched at the 2015 World Track Cycling Championships in Paris.

At the recent Velon Hammer Series we had the chance to launch VeloVueRoad – an adaptation of VeloVueTrack which has already been a massive success at the world’s leading Track Cycling events. 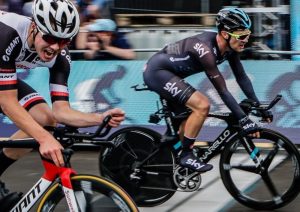 The VeloVueRoad provides a new challenge for us – this time in an outdoor Road Cycling environment. Whereas Track Cycling takes place in a confined area, the scale of Road Cycling and the terrain of the courses is something that needs a lot more attention. We couldn’t rush this project, and had to find a middle ground between pleasing riders with design while ensuring that the RF camera actually worked.

The VeloVueRoad is designed to transmit up to a pressurised overhead RF relay aircraft, allowing complete freedom for production with fantastic results wherever the bike is on the circuit.

Another critical feature of the VeloVueRoad is the bespoke built in data control system which was designed by Broadcast RF. This eliminates the requirement for large batteries and saves a lot of valuable weight, allowing remote switching of power, frequency and other RF parameters, as well as control of camera functions, essential to the successful deployment of an on-board Road Cycling camera. 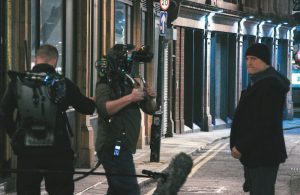 Yes, we do, and we already have our version of RF remote production. Earlier this year we launched our latest innovation ‘Truck in a Box’, which is simply an extension of an OB truck or Flypack.

This new initiative uses a point to point link system to couple a number of cameras at a remote site to the main OB with the same facilities as the local cabled cameras. There are multiple ways in which we can send numerous cameras or even a submix back to the OB without requiring extra production crew or OB facilities at the remote location. With ‘Truck in a Box’ the operation is not only cheaper, but also a lot simpler.

The point to point link is capable of carrying over 200Mbps bi-directionally. It can also have up to 16 ASI encoded vision circuits in either direction, alongside IP traffic, is bandwidth controlled so that signals cannot affect one and other, and the RF units can be combined to provide auto changeover redundancy if needed.

Cabled/Wireless Cameras, Red/Green Tally, Comms, Return Vision, Audio – ‘Truck in a Box’ can do it all!

But what do you see as the next innovation when it comes to RF technology?

The next big thing is HEVC/h.265 low latency encoding. HEVC affords the user incredible improvements in compression and bandwidth efficiency when compared to h.264. Our original first generation HEVC solution from Vislink – as used in heli downlinks at the Euro 2016 Championships, allowed us to transmit 4K pictures wirelessly last year, but it has a latency of circa 500ms which is too long for the mainstream wireless camera applications. The forthcoming second generation HCAM solution from Vislink will offer proper low latency HEVC encoding. This compression technology makes 4K UHD RF transmission available to all of our production scenarios.

We will have this solution available to us in Q3 2017 – we’ve already pre-ordered 18 systems from Vislink which will be rolled out immediately across the globe for major sporting events.

Does HDR have any impact on the services and kit you provide?

HDR is becoming increasingly prevalent across the industry. We consider HDR as important as 4K in providing the user with improved viewing satisfaction. The various standards surrounding HDR are maturing and we are required to keep abreast of all potential options. Ultimately, regardless of which standard is utilised the benefit of HDR is that it affords the viewer an increased range of the dynamic range displayed on the screen, perceived by the user as better picture definition and brightness. In order to do this the metadata from the camera will need to be carried over the RF link and this mechanism will vary according to the exact standard of HDR, but rest assured we and our technology partner Vislink are keeping an eye on HDR!

Alongside kit, you provide project management services. Is there one such project that illustrates what is involved with such services?

A great example of Broadcast RF’s project management services is Lost in London – a 100-minute Hollywood movie which was filmed with one camera in one take using a single wireless camera system from Broadcast RF, which left absolutely no room for error.

Broadcast RF Project Manager Nick Fuller spent hours on end wandering around the streets of London trying to identify suitable receive positions to make this job work. It took at least a couple of days to study the filming venues, decide on building rooftops and map out a route through the capital, yet we and the film crew still faced issues. The recording media in the camera wouldn’t last long enough, nor would the camera battery, and on top of that the weather wasn’t on our side. In fact, rigging equipment on top of a building during a blizzard was the least of our worries!

What took just over two weeks should have taken months, and with thousands of paying customers eagerly anticipating this world first we had to make sure that 100 percent coverage was achieved. In the end, the full turnkey wireless solution that we provided marked the largest single RF camera job Broadcast RF has ever done, with more receive sites than the Wimbledon Tennis and the Open Golf Championships combined.

The detailed planning and preparation that Nick put into this operation was instrumental to the production. There’s no way Lost in London would have worked without the project management services of Broadcast RF.

With the continuing integration of IT and broadcast technologies, are the colleges producing engineers with the right knowledge base to be of help to you?

In general, I think the university graduates we have taken on from Broadcast Engineering courses, have a very sound base knowledge of the basic of broadcast philosophies. What they lack is the knowledge of IP and networking which is becoming ever so demanding in the newer technologies. We think that the courses should change to incorporate more of an IP approach to broadcast methods.