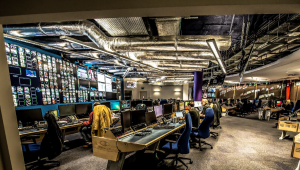 Each day, up to 16,000 hours of content pass through BT Tower, serving over 500 media production and distribution customers around the world. As well as being the backbone of all UK TV services BT Media & Broadcast (M&B) distributes TV channels for companies such as NBC Universal and Viacom. Of course, BT’s heritage goes back for more than 60 years, and that means it has seen some major changes in technology. So, with that in mind, our discussion with Vice President, Mark Wilson-Dunn began with a new network initiative…

Recently, BT announced that it has developed a trial of a software-defined network (SDN) architecture to enable a next generation highly flexible broadcast network. Can you explain more – especially how this relates to sports broadcasting?

The trial that BT announced was a further phase of a long-running piece of research into future software-defined broadcast networks. Previous phases of this research have resulted in the new BBC Aurora network we announced 18 months ago, as well as BT M&B’s Next Generation TV Outside Broadcast network. This dedicated IP network has been running live for a year, and now includes 80Gbit/s into every Premier League ground, providing multiple simultaneous uncompressed HD-SDI contribution services. Last season it provided over 3000 live vision services from Premier League Stadia to production hubs. The new research phase is exploring expansion of SDN control to include in-flight media processing, and further systems abstraction enabling even greater flexibility. We will bring both of these benefits to the sports broadcast market in future network products.

How do you see the move to IP playing out in the immediate and medium term? 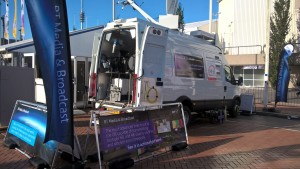 BT Tess2: The most recent addition to the BT mobile fleet

BT M&B has been carrying video and audio on its global networks as IP since 2004, when we moved from an ATM environment to IP over MPLS. In recent years, Ethernet switches, IP routers and optical transport have improved in performance to the point where we are now able to transport these video and audio signals without compression on a national scale. At the same time, broadcasters are now able to consider replacing dedicated broadcast studio equipment with IP systems. This is technically challenging, but the benefits in flexibility, and in the ability to support UHD services without compromises, are attractive. We envisage rapid take-up of IP in the studio and truck to begin when the standards – SMPTE ST-2110 – become ratified, giving confidence for equipment manufacturers and broadcasters alike. In the meantime, we are working with the standards bodies, equipment manufacturers and several customers to establish an effective method for interfacing the new IP studio with the IP WAN.

Can you tell us about the recent additions to your BT Media Move service?

We have now added automated downloading to the service. This allows files to automatically download in the background while your computer is connected to a network and then decrypt when you are ready to view them. This can also work for group email accounts so people can start working on delivery’s immediately. 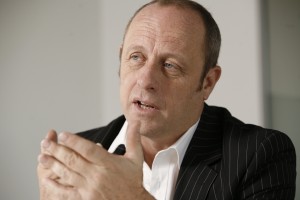 The Mobile app has also been activated so you can send and receive files direct from your phone or tablet using the same fast secure service as you can on a computer. And you get the same confirmations when they have arrived or been collected by others. We expect this to be of great interest to Mobile Journalists (Mojos), who are often working remotely or on location.

How do you see HDR developing over the next 12 months? And does that impact on your services?

High Dynamic Range is a very effective enhancement to UHD television, and we expect its use to develop rapidly. As a transporter of live video services, we are ready for HDR today.

In the evolving world of broadcasting, how can you help a client plan for the multiplicity of formats such as UHD, HDR and OTT?

Our Global Media Network delivers real-time video to over 40 major media gateways around the globe. It’s designed using the latest MPLS & IP technologies specifically to meet the demands of delivering video seamlessly in a variety of formats. We reach hundreds of broadcasters, platform owners, teleports and event venues, both directly and through partner networks.

Through our expertise and by abstracting the investment in hardware for our customers, we provide managed services and by allowing BT M&B to provide and manage the encoding/processing/contribution and distribution elements of their services, our clients can focus on their core strengths of producing great content of the highest possible quality. We develop our services with – and in some cases ahead of – the market so our clients don’t have to.

Multiscreen viewership is increasing. What trends can we expect in delivering this addition content to subscribers?

We think BT has demonstrated recently how periphery content can significantly enhance the viewers’ experience of an event. The 2017 UEFA Champions League Final for example was broadcast live on major satellite, terrestrial, OTT and internet platforms as well as having immersive 360º VR video and audio.

We see these enhancements becoming the norm for sports event broadcasting and BT M&B is already very experienced in providing this.

In March 2016, BT M&B won a competitive tender to provide Premier League Productions (PLP), a partnership between the Premier League and IMG, with a fibre-based terrestrial contribution service from all Premier League grounds to IMG’s operational facility in Stockley Park. The Premier League is the most-watched football league in the world, with games shown in 900 million homes across 200 territories. That equates to an audience of more than 4.7 billion. Multiple match camera angles, interview circuits and International Broadcaster unilateral material has significantly  increased the number of visions having to be to be managed and delivered from stadia on a match day.

Our Terabit uncompressed HD fibre contribution network is enabling Premier League Productions (PLP) to further innovate and enhance their offering to overseas broadcasters. It specifically allows PLP to remotely produce their world feed production, deliver a greater volume of quality content, reduce the risk of failure, and provides scale and flexibility for future growth. We’ve delivered a completely engineering-focused solution, but in a commercially viable way. And we’re handling increasing volumes of simultaneous visions into and from single venues. This network has flawlessly delivered over 24,000 hours of video content this season. On the last day of the Premiership season alone, we delivered 96 simultaneous visions from across 10 venues, playing our part in connecting global rights holders with the highest possible quality content.