SVG Europe Sit-Down: Calrec’s Dave Letson with thoughts on remote production and a look at the challenges ahead 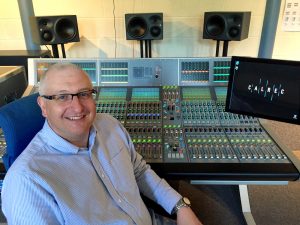 Calrec’s range of broadcast mixing consoles, remote production and audio networking solutions, its understanding of AoIP and IP infrastructures, and its work with third-party integration mean the company is at the epicentre of changing broadcast requirements. And from that position Dave Letson, vice president of sales, was able to cover a range of topics in our latest Sit Down interview…

What can we expect from you at IBC?

Type R is a new modular, expandable, IP-based radio system that is making its IBC debut. Type R makes use of standard networking technology and combines it with configurable soft panels that can be tailored to operator needs. Type R’s physical control system consists of three slimline panels: a fader panel, a large soft panel and a small soft panel. Each is compatible with COTS hardware and powered over Ethernet to keep cabling to a minimum.

At the heart of Type R is a simple 2U core with integrated I/O resources to get customers up and running immediately. A single core can power up to three independent mixing environments, with no sharing of DSP resources. Whether used as independent studio consoles, microphone processors or utility mixing, the ability to use multiple mixing engines combined with the flexibility of an AES67 compatible network provides enough flexibility to keep pace with radio’s changing requirements.

Also on show will be Brio consoles which have been upgraded with expanded channel capability. The hugely popular Brio12 and Brio36 audio consoles are getting a boost in channel count. New DSP expansion packs are now available, bringing the Brio12 up from 48 to 64 input channels and the Brio36 from 64 to 96 input channels. DSP expansion packs are available for all Brio consoles on v1.1.6 version software or above; software versions are available for free following Brio registration at www.calrec.com/brioregistration.

In last year’s Sit Down you stated ‘The culture of change we are all experiencing is only going to accelerate over the next five years.’ Is that still the view of Calrec – and what changes do you feel have been achieved since 2017?

This is still very much the case. The changes we spoke of last year referred to complimentary technology having to increase its compatibility with one another. More and more workflows are requiring a heightened level of interoperability between different manufacturers’ broadcast kit. Remote production is a prime example. This workflow has been utilised more frequently over the past 12 months, and this will only continue to increase. Major broadcasters have been using Calrec desks as part of this model at premier sporting events including the Winter Olympics, Commonwealth Games and the World Cup. In order for these events to be successful, many manufacturers’ equipment had to work smoothly alongside each other. Calrec has been working with companies like Net Insight, Grass Valley and Riedel to achieve this – although this list is not finite as our desks and other audio solutions are designed to seamlessly integrate into numerous modern broadcast workflows.

You recently announced that NEP Ireland had standardised its OB trucks with your consoles. What are the benefits of the Artemis consoles?

For over 50 years Calrec has adhered to the same basic design principles – that an audio console for live on-air use must be both extremely reliable, and easy to operate.

Artemis fits that bill – the console packs powerful broadcast features and high channel counts into the smallest footprint known to the industry, and yet has a very clear user interface with most functions for live mixing available directly on the control surface. With unrivalled fader density and four available DSP sizes, the Artemis truly is one of the most flexible options in Calrec’s range of top flight consoles, making it very popular for OB installs where real estate is at a premium.

Calrec’s OB customers can be confident that an Artemis can be taken to an event of any magnitude with the knowledge it will easily cope with the demands thrown at it.

Further to this, an Artemis can be networked via our proprietary Hydra2 networking protocol that allows them to be linked to other Calrec consoles. This is a powerful tool at a multi-truck event as all the desks will be able to share all resources.

Remote production is increasing. What impact does this have on your audio solutions?

Remote production yields huge cost savings and efficiency improvements. Remotely controlled, IP-connected kit allows the expensive equipment to be located in a broadcast facility where it can be utilised more effectively. Control rooms can switch between jobs and remote venues, with plenty of engineering staff and operational cover on hand. Plus, operators can work in the same daily environment, without travel expenses and set-up time.

Calrec started working with broadcasters on how to accommodate remote production workflows some years ago. San Francisco’s Pac-12 network was one of the first broadcasters in the US to take advantage of remote production, and allowed us to work with their audio team to help develop equipment which would help simplify the process.

The result of this research was the RP1, unveiled at NAB Show in 2016. RP1 is an audio solution that eradicates the three major challenges of remote production: latency, control and transport.

The RP1 allows monitor and IFB mixes to be created onsite, be remotely controlled from a centralised studio and transported via the broadcaster’s protocol of choice. In response to market demands for more content with no loss of quality the remote production model has grown without the need for a massive budget increase and the requirement for more expensive trucks.

What do you see as the challenges facing the broadcast audio sector in the coming months?

The biggest challenge is how to help ease our customers into an increasingly IP world. We’re looking at new ways to work with other manufacturers across the AIMS roadmap, and we’re finding ways to help our customers transition in a seamless way.

For example, audio networking has brought great benefits to production workflows by reducing cabling and set-up times, providing flexible routing that can be managed en masse at the touch of a button, and breaking the hard-ties between control rooms and studios. Some of these technologies, like Calrec’s Hydra2, offer very simple plug and play setup, but they require their own private network and specific switching hardware.

AES67 has provided a ratified solution, but all AES67 defines is a common transport layer. There are no built-in discovery or control mechanisms to enable users to freely connect devices to local switches that can pass all forms of media and data across an open, shared network infrastructure.

At IBC 2018 Calrec is launching Calrec Connect, which is designed to identify media streams and devices on a network regardless of their registration/discovery protocol, whether it’s NMOS, mDNS, AES70, SAP, or more specific Rest APIs. For our customers, this is a way for them to move towards ‘plug and play’ in an IP environment and enjoy the same levels of management and control that they have always enjoyed with Hydra2.

Finally, please tell us more about your Audio Primer.

Even though the industry is constantly evolving there are many things that remain the same. The fundamentals of audio processing are the same now as they were in the pre-digital era. What a compressor or an EQ does and how it is used to get the desired outcome hasn’t changed. Calrec’s Audio Primer is a free downloadable resource on our website, and gives a solid foundation of audio fundamentals using clear and concise descriptions and images. This resource is used by many broadcasters for training purposes, and it has been referenced by educational establishments around the world and provided as course. It has proved very popular and can be yours for the very reasonable price of absolutely nothing.