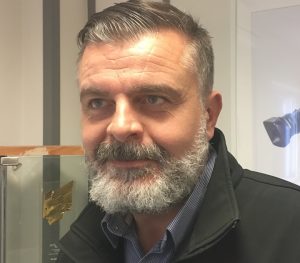 Camera Corps supplies specialty remote cameras, stump cameras, underwater cameras, onboard cameras, wearable mini cameras and remote tracking systems. Its credits include Summer and Winter Olympic Games, the World Cup, European Championship Football and reality television productions. In this last category, it has equipped programmes that have demanded up to 75 robotic cameras and control systems. As the year comes to an end, SVG Europe started its discussion with Commercial Manager Barry Parker with a reflection on the past 12 months…

You’re known for innovation – but is there one piece of equipment that has proved really caught on during 2017? Why was that?

The Q-Ball compact remote pan/tilt/zoom/focus POV camera took the broadcast market by storm when Camera Corps introduced it in 2009. The Q3, which followed in 2014, delivered higher video quality and greater optical zoom power, giving producers the freedom to mix the output more easily with that of full-size studio and OB cameras.

At NAB New York in October we previewed the new Qx which incorporates all the strengths of the established and highly successful Q-Ball and Q3 plus a more advanced camera module.

The Qx, which we will be introducing both for rental and purchase, incorporates a high-specification 1/3-inch CMOS Full HD sensor delivering 1080p60, 1080p50, 1080i and 720p. A shutter with a speed range of 1/4 to 1/8,000 second is incorporated. Imaging sensitivity is F5.6 at 2000 lux and minimum illumination level at F1.6 is 1.5 lux. Enhanced IR capability allows live video capture in zero visible light conditions using infra-red illumination.

We have retained the spherical shape and compact dimensions which made the Q-Ball and Q3 exceptionally easy to conceal from other cameras. The Qx also makes a great commentator camera. Comparable in diameter with a DVD, it incorporates a fully motorised drive giving smooth on-air control of pan, tilt, zoom and focus. Over 100 Qx heads can be operated from a single joystick panel. Also retained is the high precision motor system for which Q-Ball has long been renowned, enabling remote operators to match the precise acceleration and deceleration of much larger robotic heads when tracking moving performers on-air. 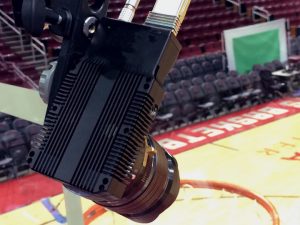 A Camera Corps Clarity head awaits the start of a basketball match.

With that in mind, what is your greatest challenge for 2018?

Getting closer to customers to anticipate future client requests and investing in the right equipment to fulfil those requirements.

How have the demands from sports broadcasters changed over, say, the last five years?

The transition from SD to HD was a major factor and the industry is obviously now gearing for 4K as UHD television receivers become increasingly popular. We are seeing increasing demand for high quality robotic head and camera packages. Pressure on programme budgets has meant an increased focus on efficiency and is changing the way we plan broadcast projects.

Has the increase in remote production had any impact on your business?

Remote production has long been a core part of our activity both as a service company and in our equipment rental business. We also anticipated the adoption of long-distance IP linked remote production as far back as the big event in Beijing in 2008. The key hurdle is latency, but there are workarounds for that and we see it as an expanding area of opportunity.

The entire broadcast industry recognises that HDR has a promising future once the technical standards are finally sorted out. The transition from SDR to HDR will depend on consumer take-up of HDR television displays – which are still in their relative infancy.