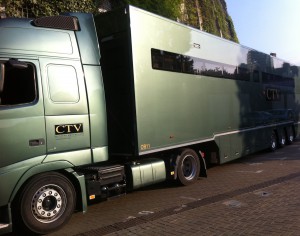 CTV OB11 on site at the Oval, London

An integral part of the outside broadcast services landscape since 1986, CTV is a mainstay of the sports production community. Latterly part of Euro Media Group, the company was consequently the subject of an acquisition by a private equity firm when PAI purchased EMG in 2014.

To what extent do you think the landscape of operation for OB providers has changed in UK and Europe over the last few years?

In what primary ways have the requirements of OB providers for sports broadcasters changed over the last few years?

I would also highlight the integration of an increasing number and variety of services and equipment, making productions more complex.

Johnstone: We are now developing remote production applications and working on integrating IP TV into our workflows.

How has the acquisition by a private equity firm in late 2014 affected the CTV business?

Johnstone: Having one major shareholder rather than four minority shareholders has given us more stability, especially in decision-making, and continues to provide us with a solid financial foundation going forward.

We hear a lot about 4K production – but to what extent is it affecting your business at this point?

Greig: It’s added to our offerings. We tend to do a fair amount of 4K productions for high-end LE shows and concerts; however, most have the 4K element post-produced and only an HD mix is done on-site. Sport is seeing an increased interest in 4K specialist cameras , incorporated into the HD production, and CTV is trialling more complete 4K productions .

How would you describe CTV’s primary USPs with regard to other OB providers?

Johnstone: CTV treats every OB and client in the same way, with the same attention to detail, and delivers any type of sport or LE production from the smallest unilateral to the largest host production. Clients also enjoy working with our highly talented and dedicated crew for both their professionalism and undoubted ability for delivering highly impressive and cost-effective technical solutions to a range of production requirements.

Some of our credits on the sport side alone include The Open, The Ashes, NFL, UFC, London Marathon, the Boat Race and the Summer/Winter Olympics, among many others.

Can you give an outline of some of your major sports broadcast projects over the next few months?

Johnstone: We are providing host coverage of The Open Championship golf from St. Andrews in July, aligned with unilateral coverage of The Open for ESPN, ESPN ITV, TGC , TV Asahi and The Open Live for the R&A. In July and August we’re also supplying host coverage for Sky of the Ashes cricket tour, and BBC Sports coverage in Beijing of the World Athletics Championship. In September we are covering three venues for ITV at the Rugby World Cup and NFL coverage at Wembley in October, plus the Race To Dubai European Tour Golf final in Dubai in November.

Greig: A hard choice between two personal highlights, the Ryder Cup at Gleneagles and The Open Championship, which because of the sheer size and number of clients comes out on top. At the Open CTV provided technical facilities and crew to all major broadcasters, including BBC, ESPN , ESPN ITV, TGC , TV Asahi and The Open Live for R&A .