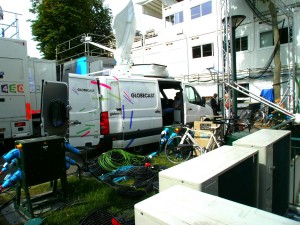 Globecast on site at Roland Garros in 2015.

A brief look at the ‘fast facts’ section of the Globecast website confirms the global reach of the broadcast content distribution and management specialist, with 12 teleports, 35 PoPs connected by 92.000km of fibre, and access to 80 transponders on 27 satellites. It is also a major employer, commanding 750 staff worldwide and operating 14 sales offices in 12 countries.

Sports content has long been a vital tenet of the Globecast business, and the company continues to support major tournaments worldwide with uplink, connectivity and contribution services – the Orange Africa Cup of Nations and Tour de France being two recent examples. With sports contribution, in particular, “booming” at the present time, it seemed like an opportune moment to catch up with Michele Gosetti, executive VP contribution & media services at Globecast, and discuss the changing expectations of contribution services, the increasing complexity of content management, and some recent sports project highlights…

How would you summarise the main aspects of the Globecast business in 2015?

Globecast has vast experience as a broadcast services provider, and has an extensive background in the provision of contribution and distribution services, and network operations to global broadcast media organisations.

The company has traditionally operated a secure global satellite and fibre network to manage and transport 10 million hours of video and other rich media each year. Over the years, Globecast has expanded its portfolio of services, establishing a presence at each part of the broadcast chain. It now provides ingest, aggregation, transmission and repurposing of content for delivery to direct-to-home satellite platforms; cable, IPTV, mobile and broadband head-ends; as well as corporate and digital signage networks

In terms of its overall service offering, what has been the most important development for Globecast of recent years? 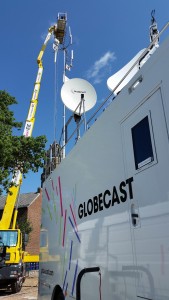 Globecast has a long-running association with the world’s most popular cycling event, the Tour de France.

On the contribution side, the sports market is booming. Acquisition is still dominated by fibre and satellite, particularly as many of the events for which we have provided our services require quite complex logistical work where it is only that combination of signal transport that works. There has been no one development, rather [it has been] the ability to provide a complete turnkey package – including, for example multiple format and audio variants – in very short time frames in areas of the world where any time frame is tricky, let alone a short one.

On the consumption side, although linear TV remains the dominant format for content consumption, there’s no doubt that audiences are becoming increasingly fragmented. As a result, we’re seeing greater demand for IP-based contribution and delivery services. This is either a means to augment existing services and respond to consumer demand, or as a flexible alternative for a new channel launch or a foray into a new region.

In what ways has Globecast’s support of sports broadcast customers developed in recent times?

We provide a wide services range from signal satellite ad-hoc news feeds to multi-platform satellite distribution. To guarantee premium services, Globecast is technically agnostic with both upstream and downstream applications to deliver audio-visual content. We utilise the latest techniques for encoding television signals and ‘mixed’ delivery networks (terrestrial and satellite) using different delivery systems such as IP, NS3, as well as UHD/4K, in which field Globecast is very active in supporting R&D initiatives

It’s our ability to provide an end-to-end service and to work with sports marketing companies and rights’ holders to create multiple packages from a given event that places us at the forefront of sports contribution.

With IP-based delivery growing in popularity, what is the long-term outlook for satellite services in sports broadcast?

Satellite remains the most viable solution in many cases and still enriches the portfolio of the network solutions provider; major sporting events are a key case in point. Satellite also offers a perfect backup for optical fibre links, especially in the case of highly sensitive video feeds. This is largely because of the lack of a single point of failure between satellite and fibre. Another use case where satellite demonstrates its superiority is when the video feed has to be transmitted from a remote place where there’s no, or not enough, IP network capacity. In this case satellite can act as an extension of the internet for journalists with a high level of security and availability. It’s interesting to note that in the world of cellular bonding, the ability to switch between cellular and VSAT – with genuinely portable systems – is now offered via Ka-band.

One of the issues sometimes highlighted about satellite is the lack of flexibility associated with the high cost of space and ground segments. But that’s no longer the case as satellite is becoming more and more innovative and well adapted to modern user expectations. The development of the aforementioned Ka-band enables the size of the antennas to be significantly reduced, while the introduction of end-to-end IP solutions simplify access and does away with the legacy manual booking systems. In the near future, High Throughput Satellites will provide more accurate footprints and the LEO/MEO constellations will make satellite latency minimal.

If you had to nominate one recent project that exemplifies Globecast’s capacity to support sports broadcast, what would it be – and why? 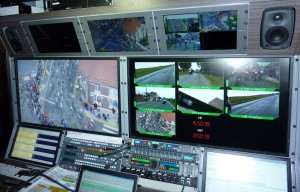 As two prime examples, this year’s Orange Africa Cup of Nations, held in Equatorial Guinea, presented considerable logistical challenges primarily due to the change in venue at quite a late stage in the planning process. Globecast was responsible for proving a variety of contribution and distribution services.

In all, Globecast supplied uplinks and contribution, including main and backup feeds, from the four stadium locations. Distribution was on a global scale, to 51 broadcasters. Globecast supplied a field team of engineers and a coordination manager in Africa as well as a MCR in Paris with a dedicated engineer and coordinator for each match. We also put in place a supervisor for worldwide distribution, plus remote live monitoring for each downlink on every satellite. Additional French commentary was added in the Paris MCR, and there were a total of eight language broadcasts.

It’s also worth highlighting this year’s Tour de France, where we faced an additional logistical challenge for the final mountain stage ending at the top of Alpe d’Huez, which we were able to overcome. Because of the terrain, the TV compound ended up being 140 km away at Grenoble Airport. Globecast supplied a 10 Gigabit Ethernet fibre connection via parent company Orange. This enabled us to provide, for remote production purposes, the delivery of 16 TV signals from the Alpe, with four in the reverse direction, as well as 24 audio links and three links for data.

Effective content management is increasingly vital to sports broadcasters – but what, in Globecast’s view, are the primary keys to success here?

This reaches more widely than just sports broadcasting. As the broadcast business becomes more fragmented, it’s critical to have the most efficient content preparation and publishing processes in place, not just to save cost, but also to minimise time to market and retain agility. The most effective way to do this is by combining local knowledge and expertise to deliver a unified service for broadcasters, which can cover from the classic contribution services to full media management. In other words, everything from media flow orchestration, metadata handling, post-production and compliance services, language versioning, VoD packaging, localised playout, analytics, payment, and subscriber and advertising management. In essence, we get the content from where it originates to where it needs to be at the appropriate time in whatever formats are required. And we can package that content to make it as commercially attractive as possible.

Finally, what can you tell us about forthcoming plans?

Globecast is committed to enabling our broadcast customers to keep pace with changing consumer habits, but also to more effectively monetise their content. As the demand for supporting their digital media strategy (e.g. second screen) becomes more firmly entrenched in the mainstream, we will continue to develop our existing IP-based offerings for broadcasters. We are also working to bring together bespoke content management, monetisation solutions and the most extensive connectivity mix, ensuring that broadcasters and media companies can continue to maximise the value of their content.