One of the most recent additions to the ranks of SVG Europe Gold Sponsors, Cambridgeshire, UK-based Imagen manages media for some of the world’s leading leagues and federations. It preserves large collections of video and enables controlled access and distribution through a secure, scalable, highly customisable web platform, Imagen Enterprise Video Platform.

In the company’s first in-depth sponsorship Sit-Down interview, VP marketing Ian Mottashed discusses some of the highlights of the last 12 months, notable recent sports broadcast projects, and a few hints about the company’s intentions for 2017.

How would you describe overall activity levels for Imagen in 2016?

In 2016 we’ve worked hard to understand the needs of rights holders and federations looking to preserve and monetise their legacy video library and to improve the experience for their customers. Many of our software releases through the year have responded to these requirements and our software developers have all been incredibly busy optimising Imagen for the sports video market.

In the summer we were excited to announce that The Premier League Archive would be hosted by Imagen. Onboarding their vast library of full high resolution assets to multiple cloud locations in record time was a real highlight, proving to ourselves how quickly we could mobilise large amounts of video data.

[Since] the summer ended we’ve been touring non-stop. The response to Imagen has been overwhelmingly positive when we’ve demonstrated new features at shows like IBC, Sportel, Rugby Expo and more. We take the touring season right up to the end of the year with our participation and [event] sponsorship of SVG Europe FutureSport in London at the end of November, and the SVG Summit in New York [in December] where we’ll be welcoming everyone to the Cloud Workshop. We’ve also won a few awards this year – the IABM Content and Communications infrastructure award and the Streaming Media Readers award for Media Asset Management (two years in a row!).

In short, 2016 has been our busiest year yet and we’re excited about the prospect of onboarding some amazing content for new clients in the next few months.

If you had to nominate three milestones in the recent development of Imagen, what would they be – and why? 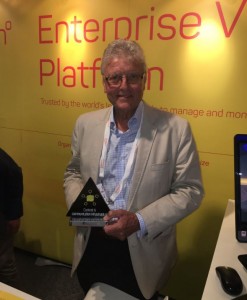 The first milestone would be the release of our Global Distribution Network feature which represents a huge technical breakthrough. Put briefly – it gives our clients’ B2B customers the ability to search and navigate entire sports libraries, and then download the high resolution clips or full games for immediate edit or broadcast – anywhere in the world. No need to request tapes or a high resolution file for transfer. We’re talking about high speed fulfilment of high value broadcast quality content – with an enormous choice. It’s a reverse CDN! Using public cloud infrastructure we’re able to make large volumes of high resolution content available to a few high importance customers.

The second milestone is the decision to productise our platform approximately five years ago. We’ve actually been around for 20 years, previously as Cambridge Imaging Systems Ltd. Our software was originally developed to serve the requirements of the Ministry of Defence, UK Security Services, the BBC, the British Library, the British Film Institute and other pillars of the UK establishment. Building a platform for demanding clients to a high specification has meant we’ve inherited a proven, highly secure and highly scalable platform. When we decided to productise our platform in 2011 it meant we were democratising professional video asset management for a wide range of industries and enabling access to the kind of technology that was once the preserve of large broadcasters and the military!

Regarding the third milestone…   We’ve only been Imagen Ltd since June 2015. As mentioned, we were previously known as Cambridge Imaging Systems Limited. Doesn’t exactly grab you by the lapels does it? So it’s been hugely important for us to create a new brand which is fresh and future-looking – a brand that better reflects the visual nature of the product and the aspirations of the people who work here now. We’re all about breathing new life into legacy, and that’s what we’ve done with ourselves. Previously we were the suited and booted boffins from Cambridge. We’re now a much more vibrant, sunnier proposition. A world class product needs a brand that cuts through the noise and hopefully we’ve done it justice.

Which are the aspects of the Imagen offer that you think make it of particular interest to sports broadcasters and service providers? 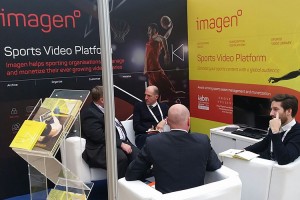 The Imagen stand at Sportel Monaco in October.

It gives them incredible choice – we deal with industrial amounts of video data. Ref: IMG – The World’s Largest Dedicated Sports Archive (imgsva.com), that’s Imagen under the hood. We can manage and monetise every part of an archive – the finished programming, the highlights, the long form games and the rushes. It’s all searchable, easy to find and ready to license.

It gives them powerful search and filtering. We can take you to the footage you need super quick through time-based metadata (shotlistings).

We deliver value for money (on behalf of our customers) – we use credit-based systems based on duration so you only pay for every second of content you need.

Broadcast customers will experience low latency because we leverage public cloud infrastructure to ensure that the high resolution file is downloaded from the closest PoP.

Also, our Global Distribution Network feature delivers near live content quicker, so broadcasters will be able to access and download the latest games for broadcast on their networks.

In what ways do you expect sports broadcasters’ requirements of video management services to change over the next few years?

They will want more choice – entire libraries to choose from and long-form content – not just clips. They’ll expect a smooth youtube style experience but with pro-editing features built in. This will give them access to just the content they need rather than suffer the overhead of downloading the whole game/match and then clipping out with their own production tools.

When they’ve located the content they need they’ll want immediate access to high-resolution files. Broadcasters are often up against tight deadlines; they haven’t got the time to wait for the source to be pulled from a tape library or RAID in the basement and delivered over ftp. They’ll also want more value for money. The only way to do that is to keep costs low by leveraging public cloud infrastructure.

A survey we’re about to publish also appears to show an increasing interest in niche sports. It tends to happen after an Olympics where more unusual sports take centre stage. We see a real opportunity for the smaller federations and leagues to monetise their content to a new audience. By enabling more choice from legacy and near live content, broadcasters will be able to create a wider range of programming to cater for this emerging audience.

If you had to nominate one specific project from this year that underlines Imagen’s capabilities, what would it be?

Definitely bringing the Premier League Archive on board. We’ve made their archive available for download to a global customer base of broadcaster customers. The portal includes full matches dating back to the 07/08 season. We currently have 3530 matches and 850 additional programmes and this number is growing fast! All searchable and highly navigable thanks to the IMG-provided time-based metadata and OPTA match states. You can search and filter, by content type, season, match week and club – all in a beautiful, fully-themed web interface. Customers can clip what they need or download entire games in high resolution. Pricing is based on duration – a commercial model which represents the best possible value for the customer – they pay in credits for just the content they need. Perhaps most amazing of all was how quickly we were able to make this project come to life. While an Imagen system can be deployed in a matter of moments as a cloud-based service, it’s testament to the media management tools and the project management team that we were able to onboard, catalogue, and then replicate across a global infrastructure this phenomenal amount of content – and in just a matter of weeks.

What can you tell us about Imagen’s plans for 2017?

While version 4 has been well-received by the industry we’ve been working hard on Imagen v5 which is all set for release in January 2017. Version 5 delivers a range of features specifically created to help sports content owners manage their libraries more efficiently and bring their content to market more quickly.

Wow, what a year for sports! So many great moments to choose from. I’m a sucker for an underdog story – I guess the triumph of Leicester City was incredible to witness, and it was wonderful to see Iceland and Wales achieve so much in Euro 2016. The Olympics and Paralympics also didn’t disappoint – so many heroes in Team GB. But I suppose Jonny and Alistair Brownlee crossing the line together during the World Triathlon Series was as compelling as sport can get!