SVG Europe Sit-Down: Jens Friedrichs of Plazamedia reveals a benchmark for AR and discusses the impact of remote productions 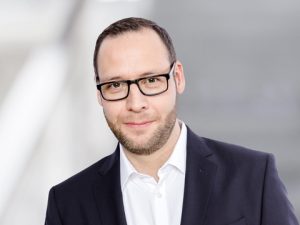 As well as being one of the leading producers of sports TV in the German-speaking area, Plazamedia is an established content solution provider for the entire spectrum of media platforms. The future will see the company also provide extensive connectivity and data centre services as well as cloud-based OTT/OVP solutions through its sales co-operations with Tata Communications and Comcast Technology Solutions. Our conversation with Jens Friedrichs, managing director at Plazamedia began with that association with Comcast.

Earlier in the year you announced a collaboration with Comcast Technology Solutions. How does this partnership benefit your clients?

This partnership means our clients can benefit from integrated solutions for online video platforms. With the video platform mpx, we offer our clients a product that covers the entire value chain for all kinds of OTT strategies: from content ingest – as a file or live stream – to processing steps such as augmenting with metadata and clipping, integrating ads, putting together product packages for different payment models – SVOD, TVOD, right through to playout in various quality levels on all kinds of platforms. For all these steps, our clients get a comprehensive and very flexible solution. At the same time, the Comcast solutions also cover the realm of analytics. We are currently finalising an end to end online platform for SPORT1, which will considerably optimise their VoD services. A corresponding live video service will be available towards the end of this year. Based on the partnership with Comcast, we can reproduce the multi-screen value chain and complex workflows required by SPORT1 via the infrastructure of Comcast Technology Solutions by introducing a customised online solution. This allows monetarisation via one-off payments and subscription models, and supports the later integration of VoD content from external clipping providers as well as social media syndication. Viewers thus have optimal access to the content through the SPORT1 website, the News app available for iOS and Android, and the SPORT1 TV apps for Android TV, Fire TV (Stick) and Apple TV.

You said that Plazamedia set the benchmark for AR productions with ESL One Cologne 2017. Can you tell us more?

For Cologne-based Turtle Entertainment, who run the Electronic Sports League (ESL), we developed and implemented a pioneering production solution specially for ESL One Cologne 2017. We did this using multiple self-developed augmented reality templates, which were linked to the movements of a tracked Spidercam. This delivered impressive pictures from the entire Lanxess Arena, which were followed by an audience of millions. 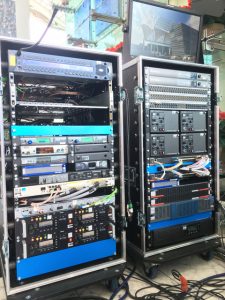 Remote rack, the technology for IP based broadcasting of the CHECK24 Doppelpass

The augmented reality templates were used to introduce the team players and to contrast the individual teams or their players. Augmented reality elements were also used to present the matches themselves over multiple levels and to visualise incoming tweets on a virtual Twitter wall. Finally, the winners’ trophy was integrated into the broadcast as a virtual 3D element together with the logos of the winners from the various qualifying rounds.

Besides the virtual graphics, we developed a graphics control system that was able to communicate directly with the IT systems of ESL. This allowed ESL – very quickly and with little manual effort – to control the appearance of the player boards directly and highlight their various player images, colours, logos and statistics straight from the game.

How is the increasing use of remote production affecting your activities?

Remote production concepts are especially suited to serial productions such as talk shows with a fixed time and/or location. They also lend themselves to sporting events if the appropriate connection options are available on site. Remote production is another alternative to studio and OB-unit production. We offer our clients all three types of production, which we can adjust to their needs and specific requirements as a customised solution. So, depending on the situation, the advantages of different production methods can also be combined into a hybrid solution. 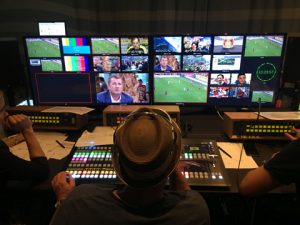 Remote production is notably used for the popular leading Bundesliga talk format “CHECK24 Doppelpass”, a weekly broadcast that we have been helping to successfully produce remotely for SPORT1 live from the Hilton Munich Airport for over a year. While with the classic OB-unit production there are natural space limits for equipment and applications, with the remote linkup to our broadcast centre near Munich, we can integrate all kinds of resources and value-added services directly into the production. So, the parallel transmission of multiple signals to the broadcast centre allows, among other things, extended archiving and highlight creation. It is also possible, for example, to interface with Skype through a Riedel Skype system –  STX-200 – which sits in our broadcast centre and is linked up to the studio at that airport.

Thanks to multiple direct connections from the control room and the use of a file-based infrastructure, we can react even more quickly to current events such as press conferences or social media trends and incorporate them directly into the programme. Remote production also enables completely new workflows. Feed, sound mixing, camera control and graphics are controlled remotely from our broadcast centre. The vision mixer in the broadcast centre is controlled from the set.

IP-based production solutions are opening up brand new possibilities for production. For instance, with our remote production of “CHECK24 Doppelpass”, we are already using an IP solution for transmitting its video and audio signals with redundant signal transmission and failsafe transfer of control information. The broadcast signals are converted into IP signals before transmission and then decoded again in the broadcast centre. The streams and network components are controlled and monitored via a separate graphical user interface and the integration of a popular broadcast control system allows more flexibility in the implementation. One of the main drivers of the project was the desire to be able to reduce the logistical overhead at the recording location and the production workflow as a whole. But we also wanted to upgrade our facility, because we see many advantages in an IP-based infrastructure. With it we can monitor all the streams, including additional parameters like Freeze, Black and many more, that are currently underway, as well as the complete network topology in the broadcast centre and at the Hilton Munich Airport. You can observe the master control room (MCR), the two OpenFlow routers that we have in the broadcast centre, then the display of the wide area network with upstream and downstream, how everything converges on the video rack in the studio and how the distribution to the audio rack or also the production rack works. In terms of the implementation, we were supported by the IP expertise of Nevion and Logic.

Do you have a European sports-related case study that illustrates what your teams can achieve?

Plazamedia brought the mobile UEFA Champions League studio bang up to date for ZDF with virtual graphics and augmented reality elements. The normal studio dimensions in the stadium – sometimes just 16 square metres – were visually enlarged using special computer graphics. The extra space gained through partly virtually created walls and ceilings allows completely new imagery and integrates pictures from the venue so effectively that viewers feel as if they are right in the middle of the action. A virtual video window, for example, now provides enough space for graphical analyses, switching to interviews, or integrating parallel events from the stadium. To give viewers the feeling of being live at the venue, the background can be switched between different perspectives; for example, a view from the stands on to the pitch, or an atmospheric shot of the stadium.

So, by comprehensively linking virtual camera technology with augmented reality elements, with ZDF we have implemented a solution that is to date unique in this form, impressively demonstrating our innovative capacity. The new, virtually extended studio sets new standards in mobile outside broadcasting.