Lawo designs and manufactures network, control, audio and video technology for broadcast and post production, as well as live performance and theatrical applications.

The company’s products include control and monitoring systems, digital audio mixing consoles, routers, video processing tools as well as solutions for IP-based A/V infrastructures and routing systems. Our Sit Down with Director of Marketing and Communications, Andreas Hilmer, started with a look back.

Although NAB is becoming a distant memory, its impact is still felt. What were visitors to your stand particularly interested in discussing?

It might sound like the repetition from 2017 – but it’s still IP. However, with large-scale IP production infrastructures in daily operation now, our visitors were more discussing the “when” and “how in detail” rather than the “if”.

As NEP Australia’s Andrews Hub, a distributed all-IP production facility connecting to more than 29 stadia across the continent, went live just shortly before the show, many visitors used the opportunity to have a closer look at the technical side of this game-changing installation. 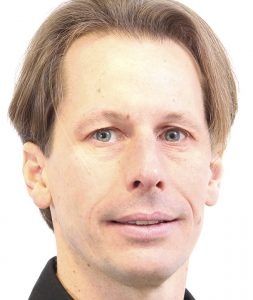 As this approach could become a blueprint for many other broadcasters, and as it is technically based on Lawo’s V__matrix core routing, processing and multi-viewing platform, Lawo audio consoles and an Arista spine-leaf switching infrastructure – all controlled and managed by Lawo’s VSM IP broadcast control system – we had a lot of interest and in-depth discussions specially with visitors aiming to realise new production facilities or to migrate to remote/at-home production scenarios.

Other than that, especially our infinitely expandable IP 4k multiviewer, our third generation of mc2 56 audio production consoles and our new SMART System Monitoring and Real-Time Telemetry solution got major attention. For many visitors SMART was like the missing piece in the Broadcast-to-IP migration, since it finally makes IP-based installations as transparent and predictable as legacy SDI installations.

The smartDASH dashboard is a vendor-agnostic enterprise software suite designed to provide full network and media visibility across an all IP, all SDI or hybrid WAN/LAN broadcast infrastructure. It’s complemented with the smartSCOPE deep packet inspection and network analyser, a media-agnostic, high density 24/7 analysis platform for IP flows in live production and delivery networks.

Both function at the intersection between IT and video operations to bridge the gap between IT networking and media operations for enabling rapid identification and diagnosis of issues in real-time.

Has the growth of IP for sports production been as you expected? And what are you providing to meet those specific demands?

Lawo was amongst the very first manufacturers who identified the potential of IP technology for broadcast production. Being an IP-native company since 2010, for Lawo it was always clear that there will be a unified IP-based infrastructure for audio, video and control based on open standards – and thus invested and developed accordingly to become a full-featured provider of IP-based infrastructure.

The possibility for realising remote/at-home productions over IP networks was also seen at a very early stage, especially for sports production, where Lawo is having a significant footprint. This resulted in the V__remote4 remote production kit, which was launched back in 2014. 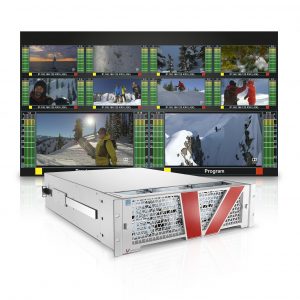 Lawo V_Matrix 8: The V__matrix multiviewer virtual modules are Capable of handling both IP and SDI sources

Today’s expanded portfolio for remote production includes signal transport for video, audio and control, including the necessary buffer sizes for real WAN applications. But even more important, our systems already include solutions for all the complexity that remote productions bring with them, such as low latency on-site audio processing for IFBs, touch-screen based remote control of on-site gear, dynamic allocation of networked resources, integrated codecs for uncompressed and compressed transport and lots more. Today, dozens of clients around the world are utilising Lawo remote production kits in their daily production.

What are the latest developments when it comes to your mc² series?

At NAB Lawo unveiled the third generation of the mc²56, which incorporates ground-breaking features drawn from Lawo’s mc²96 flagship console whilst retaining the compact size, flexibility and versatile design that address applications ranging from broadcast trucks and studios to live performance and recording. Optimised for IP video production environments, the new mc²56 includes native support for ST2110-30, AES67/RAVENNA and DANTE.

Its established best-in-class networking performance rises to the next level with the addition of unique capabilities such as IP-Share gain compensation and DSCA Dynamic Surface to Core Allocation. Lawo’s revolutionary LiveView provides thumbnail previews of video streams directly in the fader labelling displays.

Is there still some suspicion about working in the ‘cloud’? How can doubters be convinced?

Yes, there’s definitely some suspicion. However, many times this suspicion fades once the potential of the cloud approach is comprehended. First of all, in live video production we’re not yet talking about fully virtualised resources that are processed on some virtual machines in server-racks wherever on this planet.

Building a cloud today means dedicated hardware with a lot of FPGA power and high-bandwidth network connectivity. And this network connectivity allows to build up a cloud, which essentially means that processing devices don’t have to be on-site but can be accessed from anywhere via the network.

This allows for pooling resources, for example, in a big data centre or distributed over several locations – the cloud doesn’t care about where these physical resources are located. And from the cloud they can be mapped by a broadcast control system like VSM to certain productions and workflows.

This approach of flexibly allocating available resources with no physical re-wiring or re-location results in a significantly higher utilisation of the equipment. And when these devices are software-defined, the degree of equipment utilisation increases even more – like V__matrix, for instance, which allows the functionality of the processing cards to be changed at runtime via the control system by loading different virtual modules on to it.

One day a processing card could act as multiple J2K codecs, and for the next production it is turned into a 4k multi-viewer. And at end of the day, the cloud is nothing but heaven for routers in their afterlives – relieved from the burden of physical existence.

Do you have a European sports related case study you can share with us?

A good example for the utilisation of IP technology in European sports is SiA, which is the production company of Belgium’s Juliper Pro League and Proximus League – first and second league football. They turned their production from classic on-site productions with big broadcast trucks to a remote production approach with IP remote flight case units that are travelling around the country to connect all cameras, microphones and commentary boxes at the stadia to their broadcast centre in Belgium’s capital, Brussels.

This infrastructure is mainly based on Lawo’s V__matrix processing platform, V__remote4 video interfacing units, A__line audio-to-IP interfaces, mc²56 audio consoles – all networked via a nationwide dark fibre network and controlled with the Lawo VSM IP Broadcast Control System. This setup, capable of producing several matches simultaneously, each in two languages, started operation in August 2016 and was expanded for the first league production in 2017.