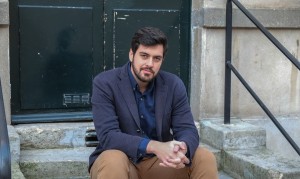 At the beginning of this year LiveLike predicted that 2017 would show an industry shift towards a steady flow of VR content, whether it be with sports, episodic experiences, frequently updated games, or anything else. The company believes that 2017 will be a monumental year — one where the public finally starts to acclimate to the type of content. So, with such bold predictions, we starting our conversation by asking Andre Lorenceau, founder and CEO about the problems that currently confront VR technology…

What do you see as the biggest challenges you face today?

For us, that means being functional on regular phones as well as tablets and VR devices. So, we’re already available to most people on earth that want to watch sports…but we lack mass exposure.

There’s a chicken and egg problem: major sponsors need to be convinced to back this new and emerging solution and promote it, but to prove that we need to have mainstream awareness to secure sponsors. It’s a real challenge, but we’re confident we’re headed in the right direction and were going to find some courageous brands to launch into this space.

For those who do not know too much about VR, how do you go about covering, let’s say, a football match?

LiveLike works a little differently than other VR platforms. We enable a small crew to easily adopt virtual reality with as few as 5 people. Our setup is quick and only varies slightly for each sport. For example, for a college football game, we learned that we needed to raise the camera-level so people on the sidelines aren’t disrupting the viewing experience. We put the camera on a dolly so it could easily move up and down the field- a very easy fix for our team. Then beyond the production, there’s a lot we can do by choosing which statistics to populate the suite each game, what we can plug in as additional content that goes beyond the main game and more.

You have said ‘LiveLike is the future of live sports viewing’. Does that mean you think the traditional viewing of sports events is on its last legs?

No! Our experience is meant to be complementary to the traditional broadcast. For example, when we did the Super Bowl, we realised that it is one of the biggest – also rowdiest and most social – games of the year – so you are not going to want to stay in a headset when you are at a party. That’s why we did highlights so you can still get the best part of the game in VR, but not miss out on any of the action in real-time. Plus, our Magic Window experience makes it easier for users to pull up the app and watch the game with an additional layer of interactivity.

Again, you have said you are ‘The world’s first virtual reality platform to watch live sports with friends’. How is that achieved? 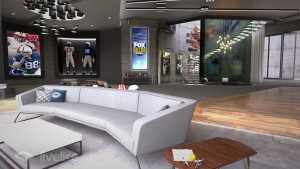 An example of the VR set produced by LiveLike

At LiveLike, we have always believed that social is key to VR. We understand that our users don’t want to feel isolated in a headset, especially because sports are inherently social. We are working on integrating social features and everything that you usually do besides watching the game during a sports game. We think that this could be a huge game changer for the industry. Stay tuned for some exciting announcements!

What will the growth of 4K (or higher) mean to you?

All increases in resolution whether that be HD or 4K are fundamentally good for consumers. Sports have always been at the forefront for new ways for fans to watch the game and have always been a huge driver of better picture. We designed LiveLike to be platform agnostic, so we are able to implement these new technologies seamlessly into our platform.

Do you have an innovative sports case study you can share?

We have had an amazing partnership with FOX Sports for almost a year now – kicking off with the Oklahoma v. Ohio State college football game in September, doing the Super Bowl and most recently the Big East Men’s College Basketball tournament at Madison Square Garden. We have been able to broadcast games for a variety of sports including American football, basketball, and a few huge soccer matches with our European broadcast partners BT Sports and Sky Sports. We can’t pick just one!

Finally, prediction time… Where do you see the world of VR in twelve months’ time?

It’s a huge turning point for the industry. Headsets are becoming more accessible, widespread and the content only continues to increase in quality. Plus, companies like Facebook, Google, etc, are doubling down on their VR focus, which is super telling.

Sports has traditionally been the driver of new content whether that’s HD, social media, AR effects with the “yellow line”, or 360 video cameras for multiple camera angle replays. We believe that sports will continue to be a huge part of this growth and are looking forward to working with our partners to bring VR and sports to more audiences.