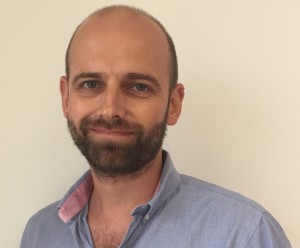 Established in 2000 by Duncan Foot and Nev Appleton, MOOV now provides comprehensive graphics services to a wide variety of UK and international broadcasters. The company has contributed to many high-profile sporting events including Wimbledon, The Grand National, Commonwealth Games, Winter and Summer Olympic and Paralympic Games. SVG Europe’s discussion with Appleton began by focusing on the massive changes that have impacted upon graphics production…

Broadcast graphics have developed at a rapid pace in recent years.  What do you see as the most innovative development?

4K graphics is probably the standout development from a broadcast perspective. Having a workflow that wasn’t compromised by the fact there’s four times the amount of resolution to deal was handled well by the graphics manufacturers and we now design and build natively in 4K for a lot projects.

Following on from that – what are your greatest challenges?

New formats or delivery methods are always the biggest challenge and at what point you have to do a global change or work with simultaneously. IP will be great from a graphics setup perspective and we are currently doing tests locally and with our graphics suppliers.

Also, HDR will soon be something we have to consider when designing and building graphics projects. There are still a lot of unknowns around this and how it will be standardised for creative companies like us. That’s part of the buzz, though, and it’s going to make your work stand out a mile, just like we’ve seen with 4K.

Everyone is seeking to reduce costs. How can this be achieved with regards to the broadcast graphics environment?

The broadcast graphics sector doesn’t stand still and so I don’t think you can expect companies or manufacturers to innovate and think costs will reduce. However, levels of automation or deploying systems that can perform multiple tasks are the areas that can save time and money. For example, we provide a graphics service to more than 25 edit suites, 7 days a week for BT Sport. Traditionally, you would have someone from the graphics department waiting until the end of the edit and then being handed a list of graphics to build and supply. This was a huge waste of money so we wrote a web-based app called iMOOV which basically lets anyone – with just 60 seconds training, build graphics and send them to their edit. It’s created huge savings on operational costs with approximately 16,000 HD and 4K graphics being made per season without the need for a graphics operator.

By writing apps like this, our clients and colleagues are happy and our team can focus on developing other skills.

‘Chinwag’ sounds intriguing? What is it?

Chinwag is a new tool MOOV developed that aggregates social media and bridges the gap between TV and second screen output. Production teams are able to manage all their social streams and content and push them consistently to various end points, such as on-air studio graphics, large screens and online, saving teams across the board doubling up on work.

What are you currently doing in the Augmented Reality (AR) world?

AR and VR are pretty much the same thing, in fact everything we do I class as Augmented. We are always exploring AR avenues, it’s a fast-developing area and the possibilities are becoming much more than on screen graphics. We’ve had some amazing projects, which have utilised tracking from Ncam, studio AR graphics for UEFA Champions League, Cricket and BT Sports Saturday show ‘Score’ all of which we are continuing to develop into the next season with RT Software and Ericsson.

We’ve also developed various VR 360 graphics control and production apps for BT Sport which we are really happy with and continue to innovate. I feel this is a space that will grow and continue to attract a younger audience who are hungry to explore new engaging technologies… basically me 25 years ago!

Programme directors and producers have become more specialised in their craft.  Do the same deeper insights into sports apply to graphics operators, too?

I think it applies to everyone in the TV sector these days. Many years ago, I would know only a few directors or producers who actually understood the technical side of things, they had an appreciation of the graphics operator role, which was reciprocated. Nowadays most people in TV understand a certain amount of each other’s role – you have to, in order to make it work.

In turn, graphics operators these days can’t just turn up cold to a job. They need to understand much more as they are usually operating control interfaces, logging data or even troubleshooting software or hardware issues and they need to get involved at production level. At MOOV we have regular training sessions to make sure we multi-skill everyone as much as possible, that way you eliminate a lot of the unknowns. I’m a great believer that you enjoy things more when you understand them. 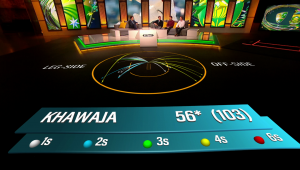 Heading into a third season of UEFA Champions League football for BT Sport, this huge scale graphics operation is by far our most challenging project. A team of graphics coordinators, designers, programmers and operators pull together a world class range of graphics for every round of studio and live match programming across 11 live channels.

Before the main show starts, BT’s award winning ‘The Goals Show’ goes live on air. This show is very graphic intensive, keeping viewers informed with all the action from the evenings eight simultaneous matches. MOOV developed software to drive the dynamic graphic ‘L’, populating it with goal flashes and live scores, channel promos and official timing and statistics.

Also, in the OB studio we push graphics content such as team logos to the six studio screens behind the presentation team using AVID’s TD Control.

The main studio show, hosted by Gary Lineker comes from BT Sports studio on London’s Olympic Park which boasts the largest ‘L’ shaped studio in Europe. A huge illuminated football pitch lights the floor which we fill with augmented team formations, player biogs and match fixtures over a huge animated map of Europe. MOOV worked closely with NCam and RT Software to develop this state-of-the-art Augmented Reality system. Surrounding the floor are large LED banners and a 4K projector screen – these are also filled with graphical content throughout the show. Finally, we have two presentation graphics positions loaded with official graphics and data from the main gallery.

Live programming and digital content is further enhanced using our own social media engine ‘Chinwag’. In the post production area editors can add their own graphics using iMOOV.

At this year’s long awaited final, BT Sport had yet another world first which we were very proud to be a part of. For several months, our special projects team developed a range of 360 VR graphics tools, which on the 3rd of June this year went live with great success.